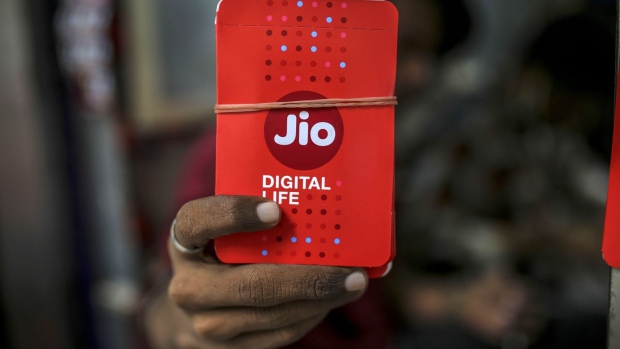 Mobile sim card packets for Jio Platforms Ltd., the mobile network of Reliance Industries Ltd., are displayed for a photograph at a store in Mumbai, India, on Tuesday, July 14, 2020. , Dhiraj Singh/Bloomberg

Google struck a broad alliance with Mukesh Ambani’s Reliance Industries Ltd., agreeing to invest US$4.5 billion and to cooperate on technology initiatives including the development of affordable mobile phones.

The global search leader is buying 7.7 per cent of Reliance’s digital services arm for 337.4 billion rupees, the Reliance chairman said Wednesday, confirming an earlier Bloomberg News report. Asia’s richest person was joined by Google Chief Executive Officer Sundar Pichai by video, a show of support for the billionaire’s efforts to build an online giant atop its nearly 400 million users in India.

Alphabet Inc.’s Google joins Facebook Inc., Intel Corp. and Qualcomm Inc. in endorsing the ambitions of Asia’s richest person, who wants to use Jio Platforms Ltd. to expand his old-economy empire into fields from 5G to e-commerce. Ambani’s Jio in turn provides global tech giants a gateway to India’s large and growing online population -- second only to China’s, whose door is shut to American services like Google and Facebook. Google, whose Android software runs on most smartphones, will now help Jio create an entry-level, affordable mobile device, executives said.

“Digital revolution marks the greatest transformation in the history of mankind,” Ambani told shareholders at Reliance’s annual general meeting. “India must lead the change to create a better world. This is Jio’s purpose.”

Google’s backing further burnishes Jio’s credentials in its push to upend online retail, content streaming, digital payments, education and health care in a market of more than a billion people. Jio Platforms is at the center of Ambani’s ambition to create a homegrown technology behemoth akin to China’s Alibaba Group Holding Ltd. With Google’s contribution, his venture has now attracted somewhere close to US$20 billion in recent months. Reliance’s shares were down 5% Wednesday after setting successive highs in recent weeks.

“Our mission with Android has always been to bring the power of computing to everyone, and we’ve been humbled by the way Indians have embraced Android over recent years,” Pichai said. “‘The time is right to increase our commitment to India significantly, in collaboration with local companies, and partnership with Jio is the first step.”

Global tech leaders are looking for multiple ways to grab a slice of the Indian market, where millions of first-time internet users are added every month. Jio Platforms offers the largest base of such users who are increasingly buying consumer goods online and downloading music and video, using cheap smartphones and Jio’s own cut-price data services.

“The bigger story is the market access to opportunities that Jio Platforms can provide these investors,” said Satish Meena, senior forecast analyst at Forrester Research Inc. “They are betting on the track record of Reliance chairman Mukesh Ambani whose scaling up of diverse businesses from energy to retail to telecom has been nothing short of impressive,” Meena said via telephone from New Delhi.

The flood of investments in Jio is closely tied to the number of internet users it has and the services it can market to them. “Jio is already connecting them to the internet, providing them with content and just starting to do commerce. It’s a very good investment opportunity for global companies,” he said.