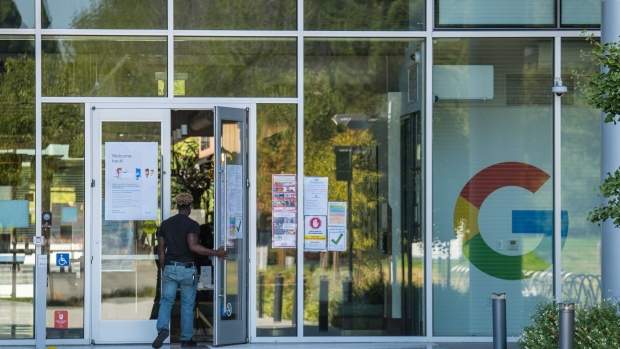 A person walks into a building at the Google campus in Mountain View, California, U.S., on Monday, July 27, 2020. Alphabet Inc.'s Google will let employees work from home until July 2021, once again pushing back the re-opening of its offices as the coronavirus continues to rage in many parts of the U.S. Photographer: David Paul Morris/Bloomberg , Bloomberg

Google announced a US$7 billion investment in the U.S. that will create at least 10,000 new jobs this year, a drop from the US$10 billion it promised it would invest in 2020 before the pandemic swept the country.

The Alphabet Inc. unit is investing in offices and data centers, including more than US$1 billion in its home state of California, Google Chief Executive Officer Sundar Pichai said in a statement on Thursday. Part of the investment will be used for data center expansions in Nebraska, South Carolina, Virginia, Nevada and Texas, Pichai said.

In early 2020, Google said it would invest over US$10 billion into offices and data centers in a range of states, including California, New York and Texas. This was also a drop from the US$13 billion it pledged in 2019 to invest in order to expand in rural areas such as Nevada, Nebraska and Oklahoma.

However, in April last year Pichai said Google would slow hiring for the remainder of 2020, “recalibrating the focus and pace of our investments in areas like data centers and machines.” Google had 135,300 staff at the end of 2020, and has said it will let employees work from home until July 2021.

Alphabet broke out figures for its Google Cloud business for the first time in February. The unit had an operating loss of US$1.2 billion in the fourth quarter, far behind its rival Amazon Web Services, the largest cloud provider, which generated fourth-quarter operating income of US$3.56 billion.

The Mountain View, California-based company revealed the number on Tuesday in a statement. For 2020, the cloud division lost US$5.6 billion, Alphabet said.

“An important element of our operating loss is that we have been building out our organization ahead of revenue, and that includes our product portfolio, the network of data centers,” Ruth Porat, chief financial officer of Alphabet and Google, said in an interview with Bloomberg Television. This will help the company pursue this large market opportunity, she added.

In 2020, Google’s services drove US$426 billion of economic activity for more than 2 million American businesses, nonprofits and other entities, the company said, citing its 2020 U.S. Economic Impact Report.