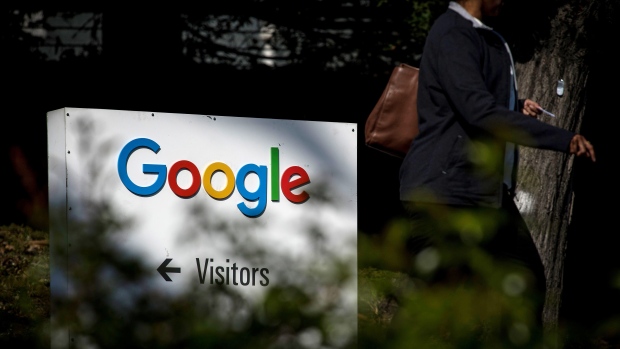 A pedestrian walks past signage at Google Inc. headquarters in Mountain View, California, U.S., on Wednesday, April 25, 2018. Alphabet Inc. is pushing efforts to roll back the most comprehensive biometric privacy law in the U.S., even as the company and its peers face heightened scrutiny after the unauthorized sharing of data at Facebook Inc. Photographer: David Paul Morris/Bloomberg , Bloomberg

(Bloomberg) -- Google promised not to silence workers who talk about their pay, part of a settlement resolving one of the first legal complaints filed by a new union representing hundreds of employees and contract workers at the internet giant.

“WE WILL NOT tell you that you cannot discuss policies with other employees,” states the notice to staff, signed by an attorney for Google and parent Alphabet Inc. and being posted at a Google data center in South Carolina. “WE WILL NOT discipline you because you exercise your right to discuss wage rates, bonuses, hours and working conditions with other employees.”

The settlement ends a National Labor Relations Board complaint filed by the Alphabet Workers Union in February alleging that management at the data center forbid workers from discussing their pay and also suspended a data technician, Shannon Wait, because she wrote a pro-union post on Facebook. Wait was reinstated earlier this year, although she left soon after.

The technology industry has mostly avoided unions, partly thanks to a reputation for high pay and fancy perks, but has been recently roiled by unrest. Amazon.com Inc. workers have staged strikes over Covid-19 warehouse safety hazards, and thousands in Alabama signed union cards. Workers at gig-economy companies like Uber Technologies Inc. have mobilized to demand the government treat them as full-fledged employees entitled to protections such as a minimum wage. Members of Google’s massive shadow workforce of contract staff have challenged what they call second-class treatment by the company.

The Alphabet Workers Union filed its complaint against units of Google staffing vendor Adecco Group AG, which employed workers including Wait, and also against Alphabet, which it deemed a “joint employer” -- a company with sufficient control over a group of workers to be legally liable for their treatment. The settlement also requires the companies to remove any reference to Wait’s suspension from her file.

Google and Adecco, which did not immediately respond to requests for comment, didn’t admit wrongdoing as part of the settlement, and Google didn’t admit to being a “joint employer” of contract staff.

AWU, an affiliate of the Communications Workers of America, launched publicly in January. It has said it isn’t seeking formal recognition or collective bargaining with Alphabet, and is committed to including contract workers in its ranks even if they’re not legally considered the company’s employees. The treatment of such workers, who in 2018 became a majority of Alphabet’s workforce, has been a persistent point of controversy at the company and one of the issues AWU is using advocacy and litigation to tackle.

Federal labor law gives workers the right to organize collectively to address workplace conditions, with or without a union, but only allows legal complaints over violations of those rights to be brought to the NLRB, an agency that can’t impose punitive damages.

Wait was reinstated the week after AWU’s complaint was filed in February. She left the company several days later because her Adecco contract was limited to two years, a stipulation workers have said applies to much of Alphabet’s contract work. She said the largely symbolic nature of the NLRB settlement reflects the need for Congress to overhaul U.S. labor law. Nonetheless, she said the union’s success in forcing the companies to clear her name and comply with the law should send a signal to co-workers about the union’s importance.

“Workers want to no longer be erased from their industry for speaking up,” Wait said. “The only way we can move forward is together.”