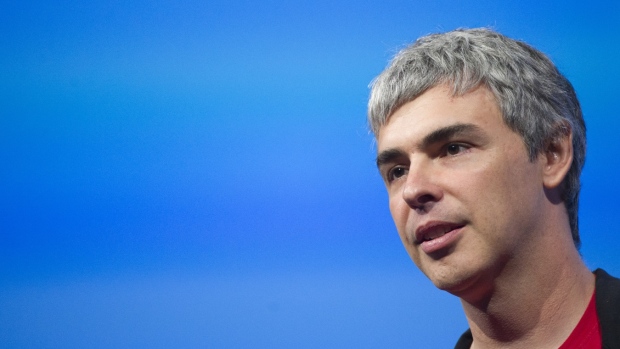 Google co-founder Larry Page worried he would lose control of the company in 2011 and delivered what appeared to be a “veiled threat” to quit over the issue, according to confidential emails and other documents recently unsealed in a court case.

Page was particularly concerned that co-founder Sergey Brin and top executive Eric Schmidt would sell special voting stock, diluting their lock on decisions at the online search giant, the documents show. Page also suggested he might shun large stock-based acquisitions because those deals could also reduce his voting power -- a situation a board member described as “a real concern.”

The documents were unsealed last year as part of a lawsuit by shareholders over the creation of Google’s C class shares. The filings, which include previously unreported board emails and depositions, reveal a potential strain in the bond between the Google founders. The trove also paints the most detailed portrait to date of how Page, who reclaimed the CEO helm in 2011, pushed the board to seal his outsized control over the tech giant.

This new stock, issued to investors as a special dividend in 2014, came with no votes. Google was open about some of the reasons for the new shares. It told investors in a 2012 regulatory filing that founder control was important and the class C stock could be used for acquisitions and employee equity grants without diluting that control. But the unsealed documents suggest another driver of the original proposal: Page needed a way to keep a grip on the company even if Brin sold his voting stock.

“Why should I sacrifice and work so hard if I might not be in control?’’ Page told Google director Paul Otellini, according to a June 2011 email Otellini wrote to other board members, adding that he considered the statement a “veiled threat.’’

“He is worried about Sergei’s shares ending up in the market. He sees no ability to buy him out,’’ wrote Otellini, who was also CEO of Intel Corp. at the time.

Google’s 2004 IPO created the model for founder control of public technology companies. It sold class A shares with one vote, while Page, Brin and Schmidt kept class B stock with 10 votes per share. Since then, companies including Facebook Inc. and Snap Inc. have used a similar concoction of super-voting stock to raise billions of dollars from investors while keeping decision-making in the hands of the original leaders. Another crop of tech IPOs is coming this year and the approach is being used again.

Tech companies argue these structures help them focus on long-term strategy, rather than obsessing over quarterly results to please Wall Street. But the approach can also leave founders less accountable if things go wrong. Last year, Google came under fire for giving executive Andy Rubin a $90 million exit package after an internal investigation determined he had an inappropriate relationship with a subordinate. Page allegedly granted a big stock award to Rubin. Directors signed off later, according to a recent lawsuit, but they had little say because Page, Brin and Schmidt still had voting control thanks to the class C stock.

"Our voting structure is a huge benefit as it gives us greater ability to focus on long-term interests," a spokeswoman for Google parent Alphabet Inc. said. "Throughout this process, the board operated with full autonomy and diligence in the best interests of all shareholders, as it has always done and continues to do." She also said the recent claim that Page bypassed the board’s compensation committee when deciding Rubin’s award was false.

Page, Brin, and several directors involved in the deliberations over the new stock didn’t respond to requests for comment. Otellini died in 2017.

The saga began in late 2010. Page was preparing to take the CEO role back from Schmidt, while Brin was tinkering with riskier moonshots at the Google X research lab.

On Dec. 23, 2010, Google lawyer Don Harrison sent the board a proposal for the new type of Google stock. The holiday email came with a timeline some directors considered aggressive, according to the documents: management would ask for approval at a meeting about three weeks later, so the change could be announced with Google’s 2011 preliminary proxy statement.

A week before the scheduled Jan. 12 board meeting, Schmidt followed up with an email to the board suggesting a call ahead of time in case directors had any “final issues” about the proposal, code named Project School.

The board did not think it was OK. Instead of approving the change that day, they appointed a handful of directors, including Otellini, to a special committee to study it further.

“I feel like we are being rushed into making this happen for this year’s proxy,’’ Otellini wrote a few weeks later to the other directors on the new committee. “I am very uncomfortable with that, and I felt that the discussion at the board was equally nervous on that point."

More than a year of sometimes-heated negotiations ensued. At the center was a debate over whether one founder should be allowed to transfer his class B super-voting shares to the other in exchange for the new non-voting class C shares. That was a key part of the founders’ original proposal and it would have let Page get Brin’s class B stock without paying cash for it.

A presentation from law firm Latham & Watkins that was unsealed in the case analyzed this issue. Before the plan, if Page wanted to acquire 50.1 percent of the voting control, he would have had to pay Brin $8.2 billion, the document estimated. Under one of the founders’ proposals, if one of them left, they could use the new non-voting shares instead of cash to transfer voting power.

"Investors will quickly look to understand the inherent conflict in the proposal," the presentation said. "The proposal would seem to encourage the founders to stay fully engaged at the company, however it creates an incentive for one of the founders to leave in order for them to realize a significant liquidity benefit while maintaining voting control."

In February 2011, Page continued to push Google’s board, according to emails between director John Hennessy and other directors and advisers.

"Larry called me to talk about the zero vote stock. He is worried that delaying it for a year will cause the company/him to be reluctant to consider large acquisitions because of the dilution of voting control," Hennessy wrote in a Feb. 12, 2011, email.

Hennessy said the board had two considerations to balance. First was the possible rejection of an acquisition. Second, the class C proposal coming so soon after Page took over the CEO role from Schmidt could affect the public’s perception of Google and its leadership. "In my mind #1 is a real concern for the company and dominates #2," Hennessy wrote.

Hennessy was right to highlight acquisitions: By August 2011, Google had agreed to buy Motorola for $12.5 billion. The deal was done with cash, rather than stock.

However, Hennessy identified what he called a "more complex issue" in his Feb. 12 email. "Larry is hoping to hold voting control even if Sergey and Eric sell," he wrote. "This a much more difficult proposition, since it makes the change benefit the founders even more strongly."

The board’s special committee drew up a list of questions for Otellini to ask Page at a dinner meeting in June 2011. The directors felt the proposal put them in a difficult position -- having to choose between the founders’ desires and appropriate corporate governance.

The group of directors, which included former Pixar Chief Financial Officer Ann Mather and early Google investor Ram Shriram, didn’t understand why the founders needed to cement control right then. An analysis the board had commissioned suggested the status quo would keep the founders in control for decades. Buybacks could be used to shore up control, and acquisitions could be done with Google’s cash hoard, the directors reasoned.

"How should the board think about the proposal in light of potentially differing long term objectives between the founders?" they wrote in the list of questions for Page. "Is there something else on your mind that needs to be addressed?"

After his meeting with Page, Otellini reported back to Mather and Shriram in a June 17, 2011, email. "He laid out his arguments in a way that I had not internalized before. He also leveled a veiled threat in that ‘why should I sacrifice and work so hard if I might not be in control’... He is worried about Sergei’s shares ending up in the market. He sees no ability to buy him out," Otellini wrote, according to the unsealed documents.

A few days later, Mather responded. "From your email, it sounds as though a stock buyback program is not going to address the underlying issue for Larry, his concern about Sergei’s shares.” (Brin was born in Soviet Russia, and some directors used a Russian spelling of his name, Sergei, rather than Sergey.)

Negotiations dragged on through 2011 and into 2012. Page met again with individual board members, but those encounters couldn’t break the impasse quickly. Finally, in April 2012, the board won a partial but important victory, convincing the founders to accept stricter limits on how they could transfer shares to each other.

Shirley Tilghman, another Google director at the time, described the benefits of the final deal in a later deposition: In the short term, it prevented Page, Brin and Schmidt benefiting from a "windfall sale" of the class C stock without affecting their voting control. It also ensured that one Founder didn’t end up with all the voting control. "The rationale for that was that we value the contributions of both of these Founders and we want to keep both of these Founders engaged with Google for the foreseeable future,” Tilghman said.

Google announced the new stock plan on April 12, 2012 and the class C shares began trading in 2014. The lawsuit, which claimed Page and Brin were taking more control without compensating shareholders, was settled after the duo agreed to beef up board scrutiny of their sales of non-voting shares.

It’s unclear if the board’s goal -- keeping Page and Brin engaged with the company -- has been successful. Soon after, Page stopped presenting at many company events and earnings calls, having developed a medical condition that makes it hard for him to talk loudly.

In 2015, he announced plans to make Google just one unit of the broader Alphabet Inc. Page is CEO of Alphabet and Hennessy is chairman. Sundar Pichai was named Google CEO, overseeing a business that generates most of the sales and profit and employs the vast majority of Alphabet workers.

Page and Brin have retreated further from public life and day-to-day operations, and Schmidt stepped down from his executive chairman role in early 2018. Meanwhile, they still control the company, holding 56.5 percent of the votes, according to Alphabet’s latest annual report.