A plan to buy a Silicon Valley campus. An office lease on San Francisco’s waterfront. Space at a building in the heart of Seattle’s tech hub.

Google has walked away from those deals in recent weeks, as the company slows its hiring and reckons with the coronavirus.

The pullback has the real estate world from New York to San Francisco bracing for a broader retreat by technology companies. Landlords and brokers in major U.S. cities have counted on shopping their shiny new offices and redeveloped buildings to an industry that was growing by leaps and bounds. Now, they say tech has gone quiet.

“No one wants to make a lease commitment when you don’t know what the other side of this looks like,” said Chris Kagi, a senior office broker for Savills in Seattle, who works with many tech tenants. “This is all totally uncharted territory. It’s not because everyone’s going to keep working from home. It’s because nobody knows when this ends and how it all works out.”

The tech industry has fueled the U.S. office market, accounting for more than a fifth of all leasing, according to research from CBRE Group Inc. In places like San Francisco and Seattle, the percentage is even higher. New York, meanwhile, had cemented its status as an East Coast technology hub, with major companies expanding in Manhattan to tap the region’s workforce.

But as companies rethink their office needs, executives are deciding it’s more prudent to wait. That means the era of splashy deals that helped fill new buildings in Manhattan could be over, at least for now.

“On the tech side, probably 80 per cent of deals that would have been done because of an exuberance of projected hiring are now on pause,” said David Falk, president of the New York Tri-State region at brokerage Newmark Knight Frank. “You may see a hesitancy for people to dive in and be exuberant about adding jobs or spending money.”

Airbnb Inc. has put a planned expansion in New York on hold, the Information reported this week in a story that first noted Google’s retreat in from real estate deals in the Bay Area.

The New York real estate industry continues to wait on confirmation that Facebook Inc. has signed a lease at the Farley building, a former post office across the street from Pennsylvania Station that is being redeveloped by Vornado Realty Trust. That deal has been in the works for months, according to the New York Post.

“We constantly review our real estate options and don’t have any updates to report at this time,” Jamila Reeves, a spokeswoman for Facebook said.

A few blocks west of the transit hub, Facebook signed a lease at the Hudson Yards development in November. Amazon also took space in the area, expanding in New York after scrapping plans to build a second headquarters in Queens.

The e-commerce giant also recently purchased the iconic Lord & Taylor building on Fifth Avenue. That was all before the pandemic battered New York, the epicenter of the virus outbreak in the U.S.

Tech’s appetite for offices wasn’t just confined to Manhattan and the West Coast tech hubs where the companies got their start. Austin, Texas, and Northern Virginia, for example, have been gearing up for major expansions from Apple Inc. and Amazon. 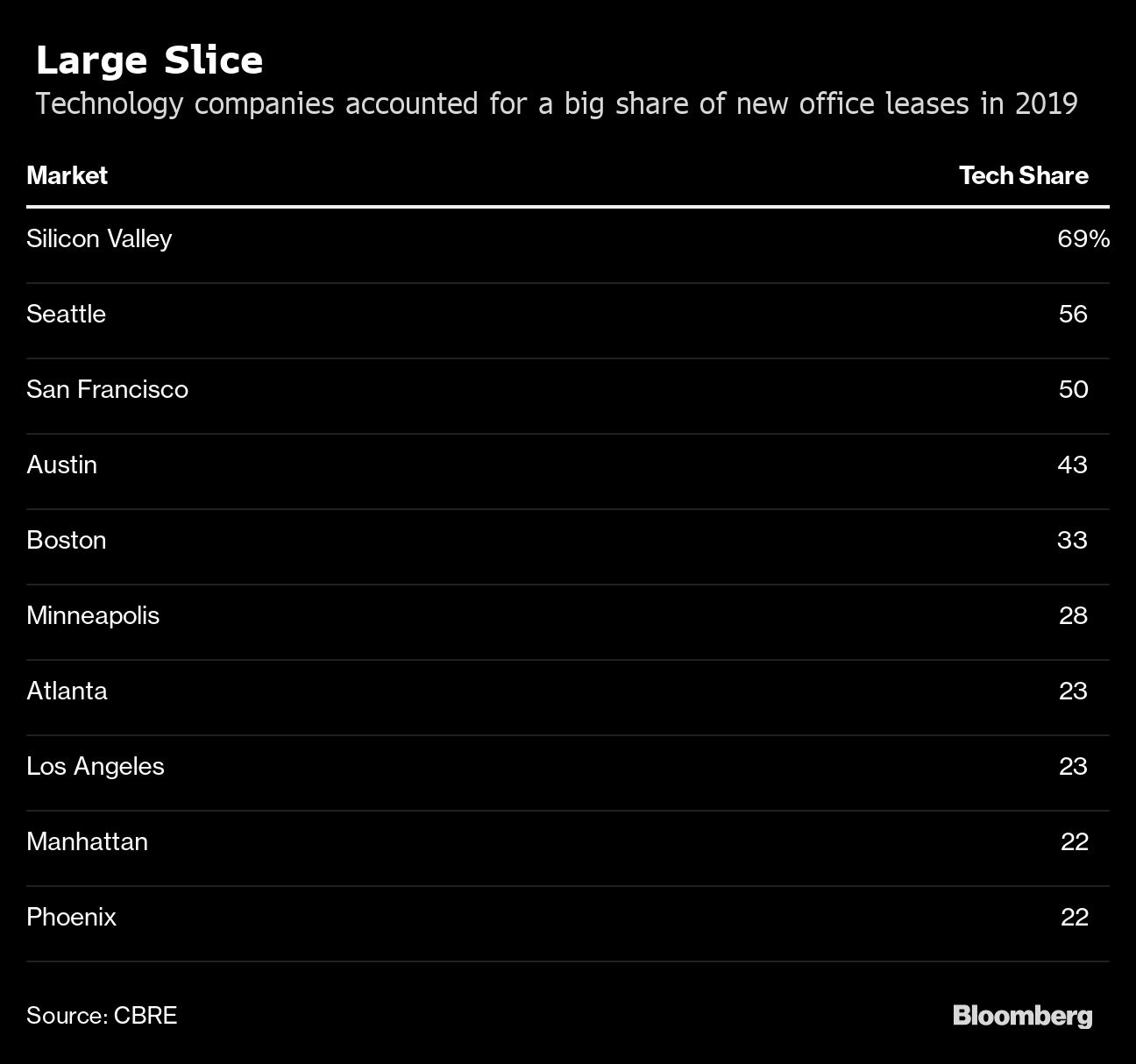 There are signs that a slowdown has arrived in the market. Net absorption in the U.S., a measure of how much office space is leased, plunged to 2 million square feet during the first quarter from 9.5 million square feet a year earlier, according to Newmark Knight Frank.

Google’s pullback in the Bay Area included an agreement in principle to acquire NortonLifeLock Inc.’s campus in Mountain View, according to people familiar with the matter who asked not to be identified discussing the private negotiations. The company also halted discussions to lease space at Pier 70 in San Francisco, the people said.

In Seattle, Google recently abandoned negotiations for a lease at Dexter Yard, which is being built by a Blackstone Group Inc. unit, according to people familiar with the company’s actions. The people cautioned that Google could resume negotiations on all three deals.

Google, a unit of Alphabet Inc., declined to comment.

The real estate pause by the tech industry may be partly strategic. Kagi, the Savills broker, said he’s advising clients planning to expand to wait a few months, when they’ll be able to negotiate a better deal. While he expects tech companies to start requiring more space per employee, to adhere to social-distancing guidelines, overall demand for offices will drop.

“The economy is not going to recover from this for some time,” he said.