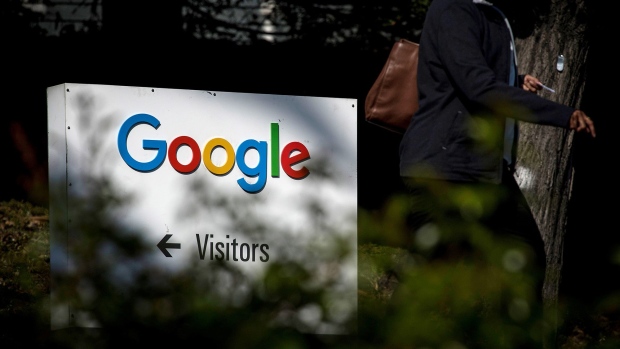 (Bloomberg) -- Four software engineers fired by Google last week plan to file complaints with the National Labor Relations Board, in which they will argue they were the victims of illegal retaliation for workplace activism. The move would further escalate a conflict between the search giant’s management and its staff that has been simmering for over a year.

Alphabet Inc.’s Google dismissed the four employees on Nov. 25. In an email distributed to its staff, the company cited “clear and repeated violations” of data security policies, saying the engineers had accessed documents “outside the scope of their jobs.” The employees — Rebecca Rivers, Laurence Berland, Paul Duke, and Sophie Waldman — disputed those allegations in an interview with Bloomberg News. They said were fired for organizing opposition to Google’s work with federal Customs and Border Protection, and for other workplace advocacy.

Google had decided against “honoring its values, or abiding by the law,” said the engineers in a joint statement. “It responded like a large corporation more interested in revenue growth than in ensuring worker rights and ethical conduct,” they added.

Google has long been known for its open, idiosyncratic corporate culture. But it has moved in a different direction in the face of persistent protests over its personnel policies and new lines of business. Executives have ended weekly freewheeling, staff-wide meetings, restricted the internal documents workers can access, and issued new guidelines discouraging workers from discussing politics in the office.

Google initially put Rivers and Berland on administrative leave, which sparked an employee protest. The other two engineers, Paul Duke and Sophie Waldman, have not previously been named publicly.

Google’s decision to fire the staff, dubbed the “Thanksgiving Four,” immediately drew the attention of Democratic presidential candidates Elizabeth Warren and Bernie Sanders, who criticized the company. “I’ve seen so much support for the four of us and everyone who’s been involved,“ Rivers said. She added that current Google staff were continuing to schedule meetings about labor organizing after the firings.

“One person’s first text message to me: ‘We need a union now,’” said Duke, who worked for Google in New York City. “People are definitely understanding that it’s an anti-labor move.”

Organized labor has traditionally not been a force in the technology sector. Some contract workers, such as security guards, have unionized, while others have failed in similar attempts. Unionization is practically unheard of among software engineers, who are typically highly paid. Duke said the recent firings show why even well-compensated workers should organize. “We were punished for collective action,” he said. “Now it’s me against some giant corporation willing to leverage all its power.”

By approaching the NLRB, Duke and the others are asking for relief from a board that has long been criticized as slow and toothless, and is now dominated by Republicans who have rolled back many pro-labor precedents. While the agency can require that companies reinstate and pay back-wages to workers who were illegally fired, it can’t levy punitive damages or hold executives personally liable for violations.

The four engineers are still exploring other legal options, according to Berland. “We’re not counting single-handedly on the NLRB,“ he said. “It’s a great concern for us all. And we’re going to pursue this through every avenue available.”

To contact the reporters on this story: Mark Bergen in San Francisco at mbergen10@bloomberg.net;Josh Eidelson in Palo Alto at jeidelson@bloomberg.net

To contact the editors responsible for this story: Jillian Ward at jward56@bloomberg.net, Joshua Brustein