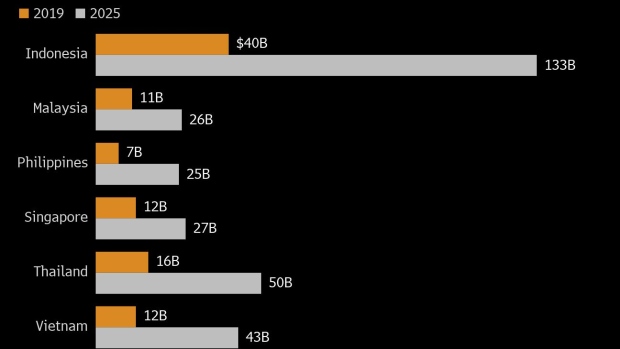 (Bloomberg) -- Google and Temasek Holdings Pte have agreed to invest about $350 million in PT Tokopedia, people familiar with the matter said, a major cash infusion that will bankroll the Indonesian online mall’s post-Covid-19 expansion.

The Alphabet Inc. unit and Singapore’s state investment firm could sign an agreement for the funding soon, the people said, asking not to be identified discussing the deal before it’s formally concluded. The financing falls short of the initial goal of between $500 million to $1 billion that Bloomberg News reported in July, though Tokopedia may still be looking for more investors.

Tokopedia, the online marketplace backed by SoftBank Group Corp., was said to have held talks with U.S. internet giants including Facebook Inc., Microsoft Corp. and Amazon.com Inc. The backing of Google and Temasek is a vote of confidence for one of Indonesia’s biggest e-commerce operators, which rode a surge in online shopping during the pandemic.

America’s largest internet corporations have looked increasingly toward Asia as growth in the U.S. and Europe slows, seeking to tap the region’s rapidly growing smartphone-savvy population. Facebook is buying a stake in India’s Jio Platforms, while its WhatsApp unit struck a deal to invest in Gojek, which has a popular digital payments service called GoPay. Representatives for Google, Tokopedia and Temasek declined to comment.

E-commerce platforms like Tokopedia, Alibaba’s Lazada Group SA and Singapore-based Shopee -- a unit of Sea Ltd. -- moved quickly to serve the millions of people forced to make their first online purchases during widespread lockdowns. Indonesia has become a key battleground between the regional rivals: The country’s e-commerce market is projected to expand from $21 billion in 2019 to $82 billion by 2025, according to a recent study by Google, Temasek and Bain & Co.