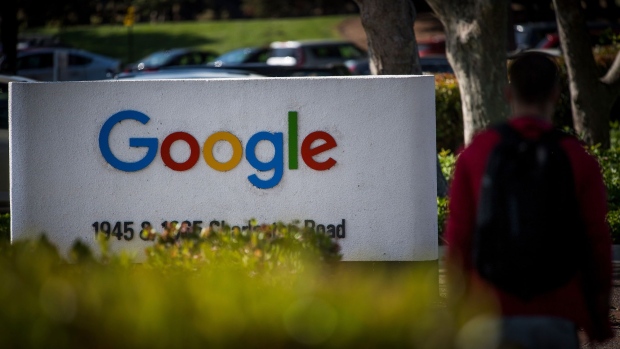 A pedestrian walks past signage at Google Inc. headquarters in Mountain View, California, U.S., on Wednesday, April 25, 2018. Alphabet Inc. is pushing efforts to roll back the most comprehensive biometric privacy law in the U.S., even as the company and its peers face heightened scrutiny after the unauthorized sharing of data at Facebook Inc. Photographer: David Paul Morris/Bloomberg , Bloomberg

(Bloomberg) -- Google improperly sought to withhold internal documents from a National Labor Relations Board trial over complaints that the company fired workers for their unionization efforts and activism, according to a judge reviewing the material.

NLRB Administrative Law Judge Paul Bogas, who was named as a Special Master to review the documents, ruled that only nine of 80 documents he looked at as of Nov. 26 were properly characterized as privileged, Laurie Burgess, a lawyer for the fired workers, said in a statement Tuesday.

That “makes it ‘impossible to believe that [Google’s] counsel’ had conducted a ‘good faith examination’ of the documents using the ‘applicable legal standards,” the judge said in a 13-page ruling issued Friday, according to Burgess. Bogas ordered Google to “immediately” produce the documents to the workers’ lawyer, Burgess said.

The order was not listed on the NLRB’s public docket, and an agency spokesperson did not immediately comment in response to an inquiry.

The NLRB’s regional director filed a complaint in December, accusing Alphabet Inc.’s Google of violating the New Deal law that protects the right of employees to engage in collective action about workplace issues, including non-union workers like those at Google.

According to the NLRB regional director, Google broke the law by questioning and terminating employees because of their activism, maintaining rules restricting legally protected organizing, and enforcing other rules in a discriminatory manner.

On Monday, three of the former employees sued Google, claiming they were wrongfully fired for challenging a company plan to collaborate with the Trump administration’s border security agencies.

In the NLRB complaint, a trial began in August but was put on hold after Google refused to produce 1,507 documents, claiming attorney-client privilege. The documents include training materials for staff on how to campaign against unionization among people they manage, Burgess said.

New trial dates may be set at a Dec. 2 hearing. The former employees intend to call Kent Walker, Google’s chief legal officer, to testify as an adverse witness when the trial resumes, Burgess said.