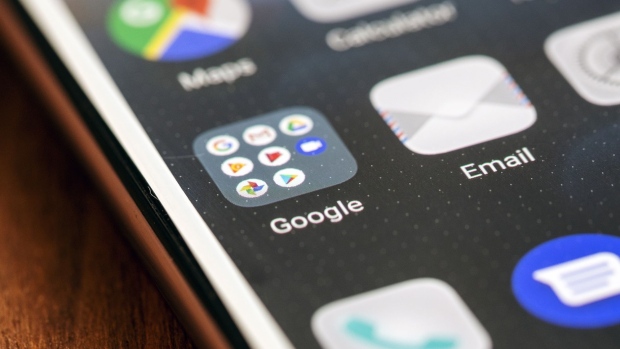 A folder containing Google LLC's applications is displayed on a Huawei Technologies Co. P20 Pro smartphone in an arranged photograph taken in Hong Kong, China, on Monday, May 20, 2019. Top U.S. corporations from chipmakers to Google have frozen the supply of critical software and components to Huawei, complying with a Trump administration crackdown that threatens to choke off China's largest technology company. Photographer: Justin Chin/Bloomberg , Bloomberg

Google won its bid to dismiss a data privacy lawsuit filed on behalf of millions of iPhone users, after the U.K.’s top court said the tech giant couldn’t be served with a class action suit.

The case, which sought billions of pounds on behalf of more than 4 million people, is “doomed to fail,” the Supreme Court unanimously ruled Wednesday. The group who brought the suit, known as Google You Owe Us, accused the tech giant of breaching its duties by collecting and using browser generated information over a period of months between 2011 and 2012.

The decision will come as a relief for the tech giant which, if the case had been allowed to proceed, could have been faced with a damages bill of around 3 billion pounds ($4 billion). The ruling also sets an important legal precedent for future class-action suits in the U.K., which are only possible under legislation for antitrust cases.

“In order to recover compensation for any given individual, it would be necessary to show both that Google made some unlawful use of personal data relating to that individual and that individual suffered some damage as a result,” Judge George Leggatt said in the ruling.

The group’s attempt to recover compensation “without proving either matter in any individual case is therefore doomed to fail.”

Since Alphabet Inc.’s Google is headquartered in the U.S., the group needed permission to serve the company with the suit in the country, which the court also rejected. A lower court had previously sided with Google but appeals judges overturned the ruling in 2019.