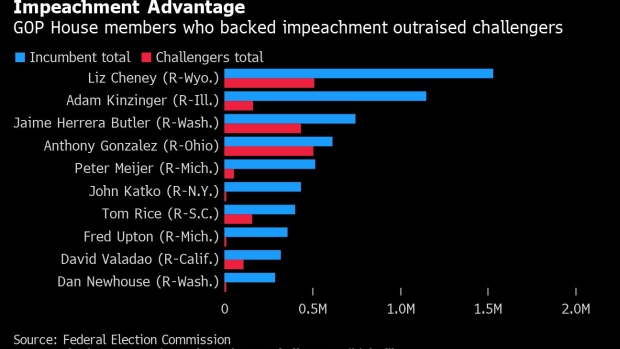 (Bloomberg) -- Former President Donald Trump has vowed to drive the 10 House Republicans who voted to impeach him out of office, but GOP donors, political action committees and even some Democrats poured money into those candidates’ coffers in the wake of the Jan. 6 Capitol riot, their latest filings with the Federal Election Commission show.

Collectively, the 10 members raised $6.4 million, with seven setting personal records for first-quarter fundraising in a non-election year. All outraised the challengers who filed campaign finance reports.

Trump’s promise to fight the U.S. House Republicans who voted to impeach him on a charge of inciting the Jan. 6 insurrection at the U.S. Capitol has worried GOP officials. Republicans need to flip only a handful of seats to regain control of the House in the 2022 midterms, and weakening incumbents seeking re-election by supporting little-known challengers would only complicate that task.

Three of the seven record-setting incumbents -- Representatives Liz Cheney of Wyoming, the third-ranking House Republican, Adam Kinzinger of Illinois and Anthony Gonzalez of Ohio had the biggest quarterly hauls of their careers during what’s normally a slow time for raising money.

Stronger challengers may yet emerge, but the 15 primary challengers so far against nine of the Republicans who voted to impeach combined to raise $1.9 million, with about 24% of that coming from their one pockets. One of the incumbents, John Katko of New York, remains unopposed.

Representative Tom Emmer, chairman of the National Republican Congressional Committee, and House Minority Leader Kevin McCarthy are trying to discourage Trump from backing primary challengers and have said they will support the incumbents.Undeterred, the former president has already endorsed Max Miller, a former Trump campaign and White House aide, in his challenge to Gonzalez.

Although an adviser has said that Trump’s leadership PAC, Save America, has more than $80 million to dole out, it did not contribute to Miller in the first quarter.

The fundraising race between Gonzalez and Miller is tightest, but Gonzalez topped Miller by raising some $616,524, the best quarter of his fundraising career. That haul included tens of thousands of dollars from Republican leadership PACs, including the maximum $10,000 from McCarthy’s Majority Committee PAC.

Overall, corporate, leadership and conservative PACs gave $1.6 million to the House incumbents, compared to $17,500 for challengers. Prosperity Action PAC, started by former House Speaker Paul Ryan, gave to all 10 incumbents who voted to impeach. The PAC for Alphabet Inc.’s Google gave to nine of them.Entrepreneur Kimbal Musk, the brother of Elon Musk, who has supported both Democrats and Republicans, gave $2,800 to each of the 10. They also each got $2,800 contributions from Chris Larsen, co-founder of Ripple Labs Inc. and $2,900 from John Chambers, the former executive chairman and chief executive officer of Cisco Systems Inc.Some longstanding Democratic donors who poured millions into super PACs that supported President Joe Biden also crossed over to donate to the 10 Republicans who voted to impeach. Seth Klarman, CEO of Baupost Group LLC and Stephen Mandel, founder of Lone Pine Capital, each made $2,900 donations to the 10 incumbents.

But Republicans poured in money, too. Cheney, who raised the most among the 10, got $10,000 donations from Senator Mitt Romney’s Believe in America PAC and the Republican Jewish Coalition PAC, and $5,000 from leadership PACs led by Ryan, Senators Mitch McConnell of Kentucky, Bill Cassidy of Louisiana and Shelley Moore Capito of West Virginia. Hedge fund manager Paul Singer gave her $5,800, the maximum $2,900 for the primary and the election, and her parents, former Vice President Dick Cheney and his wife Lynne, each kicked in $5,600.Trump said in a statement issued Wednesday through his PAC that he would endorse an opponent to Cheney, one of his most vocal critics, “soon.” Trump also discouraged multiple candidates from challenging her and splitting the vote, but she already has four.

But all this good luck for the incumbents may not last.Republican donors who don’t share Trump’s enthusiasm for settling scores are worried that his army of online donors have yet to contribute. The 10 incumbents who voted for impeachment raised just 8.8% of their money from grassroots contributors who give less than $200.

“Trump – and those loyal to his brand – is still king when it comes to bringing in grassroots dollars,” said Dan Eberhart, a Republican donor and fundraiser. “Incumbents who voted against Trump have to be worried.”