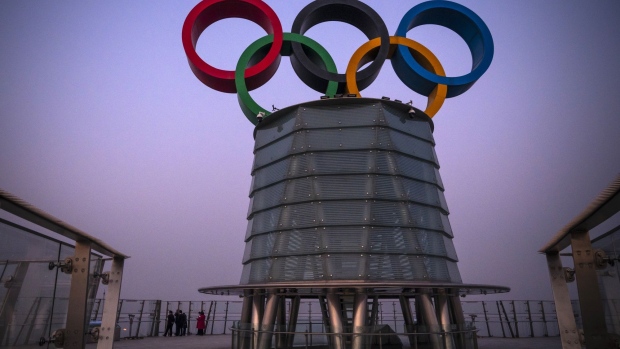 The Olympic rings at the observation deck at the Olympic Tower in Beijing, China, on Friday, Jan. 7, 2022. Beijing said it will conduct the winter games in a so-called “closed loop”, with participants only allowed to move between Olympic venues and other related facilities, and to use designated transport services. Photographer: Andrea Verdelli/Bloomberg , Bloomberg

(Bloomberg) -- Two top Republicans on the House Energy and Commerce Committee are pressing NBC executives about how they will use the company’s coverage of next month’s Olympic games in Beijing to highlight China’s human rights abuses.

In a letter to Jeff Shell, NBCUniversal’s chief executive officer, and Gary Zenkel, the company’s president of Olympics and business, the lawmakers also are requesting answers to a series of questions about possible influence of the Chinese Communist Party and the International Olympic Committee on the network’s winter Olympics coverage.

The letter, signed by Representative Cathy McMorris Rodgers, the top Republican on the full committee, and Representative Robert Latta, the ranking Republican on a subcommittee that governs issues affecting the media industry, is the latest effort by U.S. lawmakers to use the Olympics to raise concerns about China’s human rights record.

A spokeswoman for the company didn’t immediately respond to a request for comment. In a video presentation with reporters last week, Molly Solomon, executive producer of NBC’s Olympics broadcast, said the network understands “that there are some difficult issues regarding the host nation.”

The query further underscores how Republicans and Democrats are largely aligned on China despite Washington’s deep partisan divisions on most major issues. In a letter last month to Shell, Senator Jeff Merkley and Representative James McGovern, both Democrats, called on NBC to address “the impact of China’s human rights abuses” and press Chinese authorities to publicly affirm media and religious freedom. The Biden administration won’t send an official U.S. government delegation to protest human rights abuses.

NBC, part of cable giant Comcast Corp., could face a backlash if it ignores the issue. But covering it too aggressively could upset Chinese authorities and jeopardize the company’s investment in theme parks and access to a key market for its movies.

In their letter, the two Republican lawmakers said China has “tightened its grip” rather than opening up the country to democratic values and human rights since joining the World Trade Organization in December. They said those in NBC’s “corporate boardroom” should be among those taking note of CCP atrocities against Uyghur Muslims in Xinjiang province, ongoing crack downs on citizens in Hong Kong and Beijing’s use of its military presence to threaten Taiwan.

They are asking the company to respond to a series of questions by Feb. 7, including whether NBCUniversal has any investment in the Peoples Republic of China, and whether either the CCP or the IOC has taken any step to influence the company’s coverage of the games themselves or the Chinese government and the Olympic committee.

NBC pays about $1.3 billion on average for each Olympics. The company plans to air the winter games, which begin Feb. 4,  on its broadcast channel and on cable channels like USA and CNBC. NBC also will carry every event live on its streaming service, Peacock.