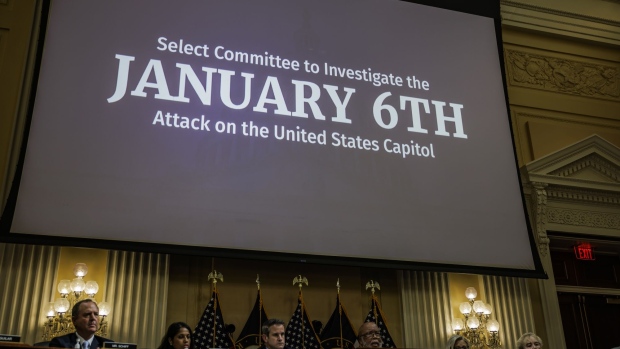 Cassidy Hutchinson, aide to former White House chief of staff Mark Meadows, displayed on a screen during a hearing of the Select Committee to Investigate the January 6th Attack on the US Capitol in Washington, D.C., US, on Thursday, June 23, 2022. The House committee investigating the 2021 insurrection at the US Capitol is focusing on Donald Trump's attempts to pressure top Justice Department officials to bolster his claims of election fraud in battleground states that Joe Biden won. , Bloomberg

Cassidy Hutchinson, a former aide to then-White House Chief of Staff Mark Meadows, said in video testimony played Thursday that Gaetz, Gohmert, Biggs, Brooks and Perry had asked for pardons. She also said she had heard that Representative Marjorie Taylor Greene, who was newly sworn-in at the time, had asked for a pardon from the White House counsel’s office, a statement that the Georgia Republican promptly labeled “gossip and lies.”

There was also video testimony of former White House lawyer Eric Herschmann saying Gaetz had requested a pardon that would cover a broad number of unnamed activities. And former White House official John McEntee said Gaetz told him he had asked Meadows for a pardon.

Representative Jim Jordan, the top Republican on the Judiciary Committee, also inquired about the status of pardons but did not specifically ask for one, Hutchinson said.

The lawmakers were some of Trump’s most vociferous supporters on Capitol Hill. Perry, in particular, came up repeatedly during Thursday’s hearing for his attempts to install a fervent Trump ally at the head of the Justice Department to pursue election-fraud claims.

Biggs also was identified in a separate Jan. 6 committee hearing Tuesday by Arizona House Speaker Rusty Bowers as among those who had been pressuring him to use the legislature to decertify that state’s Joe Biden electors. In late May, a lawyer for Biggs responded to a committee subpoena by accusing the panel of legal overreach -- including its examination into any alleged “effort by certain House Republicans after Jan. 6th to seek a presidential pardon.”

Brooks, who has agreed to talk to the committee under certain conditions, sent a Jan. 11 email seeking pardons on behalf of himself and Gaetz for “every Congressman and Senator who voted to reject the electoral college vote submissions of Arizona and Pennsylvania.”

Brooks, who on Tuesday lost the GOP primary in Alabama for a Senate seat, said in that email Trump had asked him to make the request.

“There was a concern Democrats would abuse the judicial system by prosecuting and jailing Republicans who acted pursuant to their Constitutional or statutory duties under 3 USC 15,” Brooks spokesman Brad Decker said in an email Thursday, referencing the statute on the congressional electoral certification. “Fortunately, with time passage, more rational forces took over and no one was persecuted for performing their lawful duties, which means a pardon was unnecessary after all.”

The Jan. 6 committee, however, had a different read. “The only reason I know to ask for a pardon is when you think or know you committed a crime,” responded committee Republican Adam Kinzinger.

Another committee member, Democrat Jamie Raskin, said those who requested the pardons did so because they had the “inside track” and felt like “they needed one.”

“That is indicative to me of consciousness of guilt of the whole enterprise of trying to overthrow the election,” Raskin, who managed Trump’s second impeachment trial, told reporters after the hearing.

Gaetz tweeted that the panel was “an unconstitutional political sideshow,” that’s “rapidly losing the interest of the American people and now resorts to siccing federal law enforcement on political opponents.” He didn’t directly address the allegation that he repeatedly sought a pardon.

Precisely why or for what acts the lawmakers believed they might need pardons was unclear.

Thursday’s hearing did share extensive testimony and other evidence Perry had been deeply involved in efforts to install a new acting attorney general who would more aggressively pursue unfounded election fraud claims.

Some of these members also personally attended meetings at the White House where they discussed a scheme to send false slates of electors to Washington that could have disrupted or delayed the certification of Biden’s presidential victory.

Several of the other lawmakers’ offices did not immediately respond to requests for comment.