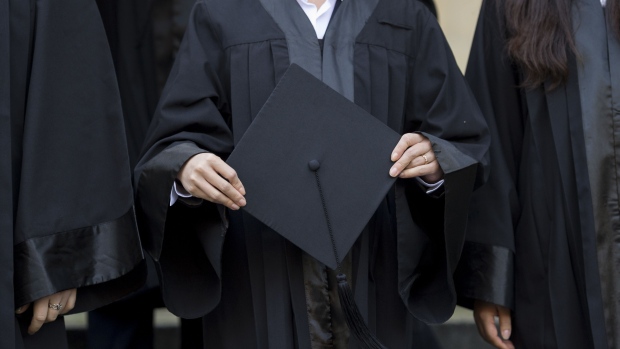 (Bloomberg) -- The Biden administration was accused in a lawsuit by six Republican-led states of overstepping its authority with a plan to forgive federal student loans.

Nebraska, Missouri, Arkansas, Iowa, Kansas and South Carolina asked a federal judge on Thursday to immediately block the program before the administration starts the process of canceling loan balances in the coming weeks.

“In addition to being economically unwise and downright unfair, the Biden Administration’s Mass Debt Cancellation is yet another example in a long line of unlawful regulatory actions,” the six states said in a lawsuit filed in Missouri federal court.

President Joe Biden’s plan is based on a 2003 federal law authorizing student-debt forgiveness for individuals serving in the military during a war or living somewhere designated as a “disaster area” by a governmental entity, according to the complaint.

The states argue the White House plan isn’t “remotely tailored to address the effects of the pandemic on federal student loan borrowers,” as required by the law. They also cited Biden’s claim in a recent “60 Minutes” interview that “the pandemic is over.”

“The Biden Administration’s executive action to cancel student loan debt was not only unconstitutional, it will unfairly burden working class families and those who chose not to take out loans or have paid them off with even more economic woes,” said Missouri Attorney General Eric Schmitt in a statement. “The Biden Administration’s unlawful edict will only worsen inflation at a time when many Americans are struggling to get by.”

White House spokesman Abdullah Hasan said Republican state officials are “standing with special interests, and fighting to stop relief for borrowers buried under mountains of debt. The President and his Administration are lawfully giving working and middle class families breathing room as they recover from the pandemic and prepare to resume loan payments in January.”

Biden unveiled the package of student-debt relief in August, which includes $10,000 in relief per borrower, subject to income caps of $125,000 per individual and $250,000 per household. Pell grant recipients can be forgiven an additional $10,000.

Earlier this week, a California-based libertarian group filed a separate challenge to the plan in Indiana, arguing that the proposal will harm borrowers in states with laws requiring tax payments on canceled loans. In a response, the Department of Justice clarified that anyone who qualifies for automatic relief will be given an opportunity to opt out of the one-time loan forgiveness plan.