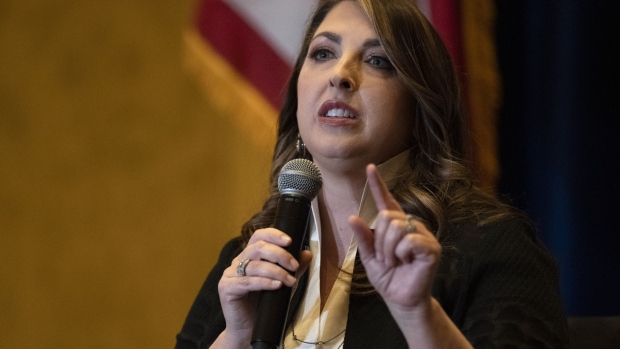 Ronna McDaniel, chairwoman of the Republican National Committee, speaks during the Republican Jewish Coalition (RJC) Annual Leadership Meeting in Las Vegas, Nevada, U.S., on Saturday, Nov. 6, 2021. Following Tuesday's results, the National Republican Campaign Committee added 13 House Democrats to the list of 57 it was targeting for defeat in the midterm elections as the GOP seeks to erase Democrats five-seat margin in the House and control of the 50-50 Senate with Vice President Kamala Harris's vote. , Bloomberg

(Bloomberg) -- The Republican Party is setting out on a review of its disappointing performance in the midterms, an election in which US voters issued a strong rebuke of Trump-backed candidates who still say the 2020 election was stolen.

But eight of the 10 members of the newly announced Republican Party Advisory Council are election deniers.

In a statement, RNC Chair Ronna McDaniel said the group would “assess the midterms and plan for 2024,” and examine how to fare better with suburban women, young voters and people of color, key demographic groups that decided the 2022 elections.

Since the Nov. 8 midterms, when Democrats held on to the Senate and allowed Republicans only a slim majority in the House, Republican mega donors and former backers like Rupert Murdoch have indicated Trump should not run for president a third time. He announced the week after the elections. Nevertheless, McDaniel has continued to back the former president and has downplayed the Jan. 6, 2021, US Capitol attack by his supporters.

David Kochel, a Republican consultant who works in Iowa, said that naming election deniers to the advisory panel was a “recipe for failure” given that their messages failed in what should have been winnable races around the country.

“Elections are supposed to be about the future, not the past,” he said. “If we spend all our time talking about 2020, we’re never going to win the swing voters that we need in 2024.”

The panel is one of several RNC groups analyzing the midterm results, including one co-chaired by RNC Committee members Henry Barbour and Harmeet Dhillon.

Among the eight members of the advisory panel who have either cast doubt on the legitimacy of the 2020 election or outright said it was stolen are Blake Masters, the failed Arizona Senate candidate; failed Ohio House candidate Madison Gesiotto Gilbert, who tweeted that she was “sick” of “Republicans turning their backs” on Trump’s efforts to fight his loss; and Michigan Representative-elect John James, who pushed for an audit of election results for three weeks before conceding his loss in a 2020 Senate race.

“I am thrilled that this talented group of Republicans will be shoulder to shoulder with us as we work to grow our party,” McDaniel’s statement said.

One exception is former Trump adviser Kellyanne Conway, who wrote in her memoir that Trump’s campaign team “simply failed to get the job done” and “failed again afterward” when they did confront him about accepting his loss and moving on.