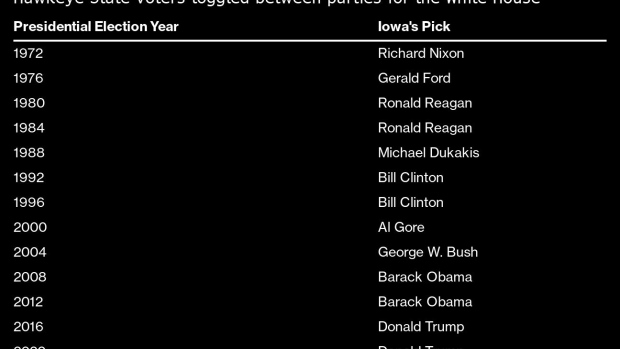 (Bloomberg) -- Iowa tapped Barack Obama for two terms as president but has leaned rightward since backing Donald Trump twice, reaching a point now where the outcome of next month’s election could end its status as a swing state.

The Hawkeye State’s lone congressional Democrat, Cindy Axne, is in a tight contest as Republicans aim to turn the state’s congressional delegation fully to their side for the first time since the 1950s. Since 2020, the share of registered Democrats has slipped, while Republicans and independent voters have increased. Governor Kim Reynolds, both its US senators, three of the four US representatives and the majority in the state legislature are Republicans.

While several of the races have tightened in the weeks before Election Day on Nov. 8, Iowa’s results could underscore the GOP’s strength ahead of the 2024 presidential election and lead the parties to focus efforts elsewhere.

“If Republicans sweep the statewide offices along with the federal and state legislative races in 2022, Iowa’s status as a bellwether is probably over,” said Andrew Green, a political science professor at Central College in Pella, Iowa, and an independent voter. “Iowa has always been known for having an independent streak.”

But Iowa may lose its bellwether status because its position as the site of the first presidential nominating contest may not last after several problems with the 2020 caucus. Candidates, pollsters, strategists and reporters normally flock there almost two years before a presidential election to shake hands, hit fairs and attend county luncheons to take the temperature of the largely White and rural state.

“Iowa’s off the map for 2024 in terms of both parties’ strategy to win the electoral college,” said David Wasserman, a senior editor for the nonpartisan Cook Political Report.

For decades, Iowans toggled between parties based on who serves their needs, whether that’s support for corn-based ethanol or flood relief when the Missouri River overflows.

Since 2020, Republicans have made inroads. The percentage of registered Republican voters has increased from 33.6% to 34.2% of the electorate, and those reporting no party affiliation edged up from 32.4% to 33.4%. Democrats have dropped from 33.2% to 31.5%, state data show.

“Iowa is still a purple state,” though “maybe getting a red tint,” Republican Party of Iowa Chair Jeff Kaufmann said in a statement.

As they are nationwide, Republicans are telling voters that Democrats are out of touch with the economic pain Iowans feel. Meanwhile, Democrats are stressing abortion rights after the US Supreme Court overturned the constitutional right to the procedure.

Inflation has particular resonance in Iowa. Rising costs and surging fertilizer prices are eroding the value of many farmers’ incomes, and they say they are worried about demand for the state’s corn-based ethanol amid the national push to electric vehicles. And working families say they are fretting about the availability and cost of child care.

Three of Iowa’s four congressional districts are among the most competitive in the midterms but are leaning or likely Republican, according to the Cook Political Report. In the 3rd District, Axne is fending off ads tying her to President Joe Biden and House Speaker Nancy Pelosi, whom the GOP is blaming for inflation.

Axne, who is emphasizing a bipartisan stance, has attacked her challenger Zach Nunn on abortion. In the last five weeks, ad spending by both sides is almost equal, according to AdImpact, which tracks political spending.

A Des Moines Register/Mediacom Iowa poll released last week shows the race is about even as well. Of likely voters in that district, 49% said they would vote for a Democratic congressional candidate, just 1 percentage point more than those voting Republican and well within the margin of error, according to the survey conducted by Selzer & Co. The Cook Political Report rates the district as leaning Republican.

“We’ve got Cindy Axne in one of the most competitive seats,” Representative Hakeem Jeffries, a New York Democrat and leader of the House Democratic Caucus, said in an interview at the Polk County steak fry he attended on Axne’s behalf. “I am confident she can win but we need folks to turn out to vote.”

Democrats have marked some success in beating back early Republican leads. In the 2nd District, 46% of likely voters surveyed in the Des Moines Register poll favored a Republican congressional candidate, down from 54% in July. That’s discouraging news for GOP Representative Ashley Hinson vying against her Democratic challenger, state senator Liz Mathis.

Meanwhile, Senator Chuck Grassley’s lead against his Democratic challenger is the tightest the 89-year-old US senator has seen in decades. The Cook Political Report this month shifted the race to lean likely Republican from solid Republican.

Mueller, the Republican farmer, said he wants whoever is elected to push an agenda from infrastructure to trade that will benefit the state and its key industries. Farmers, for example, are seeing sales revenue for corn, soybeans and other commodities rise with higher crop prices but costs have shot up way more.

Biden may not have visited an ethanol plant in the state earlier this year and suspended a ban on higher levels of ethanol in gasoline blends for the summer if Axne weren’t part of the congressional delegation, Mueller said.