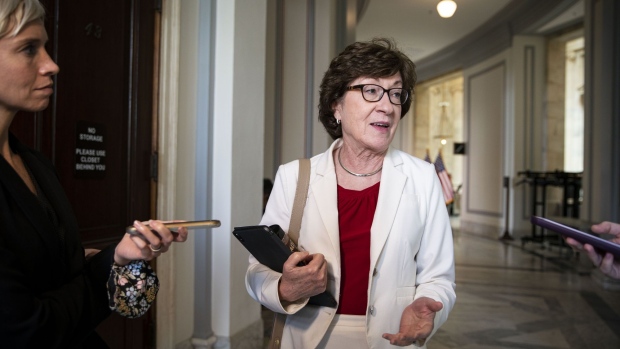 Senator Susan Collins, a Republican from Maine, speaks with a member of the media on Capitol Hill in Washington, D.C., U.S., on Thursday, June 10, 2021. President Biden's hopes for a bipartisan deal on the biggest infrastructure package in decades took a blow with the end of direct talks with the lead GOP negotiator, increasing the likelihood that Democrats pursue a sweeping, multi-trillion dollar package on their own. , Bloomberg

(Bloomberg) -- The infrastructure spending package developed by a bipartisan group of U.S. senators will be “targeted” and “responsible,” one of its architects said on Sunday.

Republican Senator Susan Collins of Maine continued to call for spending to be confined to traditional priorities like repairing roads, bridges and airports, and split off from the broader proposals of the Biden administration like elder care funding.

“We can look at these issues, but they are not infrastructure and they should be considered separately. And I believe they will be,” Collins said on CBS’s “Face the Nation.”

Her comments continued a months-long debate about what should be considered “infrastructure.”

Speaker Nancy Pelosi countered that an exclusive focus on bricks-and-mortar spending “is, by and large, something that could have been talked about 50 years ago.”

Collins is among a bipartisan group of 10 senators that has formulated a $1.2 trillion deal on an infrastructure bill they will pitch to President Joe Biden.

Biden had been meeting with a group of Republican senators led by Shelley Moore Capito of West Virginia but the talks ended last week without an agreement. The White House sought a plan that would total $1.7 billion.

Collins said Sunday that neither a gas tax increase nor a roll back of the 2017 Trump tax cuts would be included.

The group had discussed indexing the gas tax to inflation, Republican Senator Mitt Romney of Utah, one of the negotiators, said last week.

But Biden would consider that a tax increase on those making less than $400,000 a year, something he has pledged not to do, according to a person familiar with the matter.

Dick Durbin, the No. 2 Senate Democrat, said Thursday he’s in favor of indexing the gas tax. Other Democrats have indicated they’d prefer to raise corporate taxes to pay for the infrastructure spending -- a non-starter for Collins.

As the White House and some Democrats continue to seek common ground with Republicans, Representative Alexandria Ocasio-Cortez said the scope of the bill shouldn’t be defined by the GOP minority in Congress.

“The argument that we need to make here is it’s worth going it alone if we can do more for working people in this country,” the New York lawmaker said on CNN’s “State of the Union.”

The bricks-and-mortar spending focus “is predicated on an infrastructure that is of the last century,” Pelosi said, also on CNN. “I think we have a responsibility -- let me say it a different way -- to find common ground, if we can. But if we can’t, we have to stand our ground.”