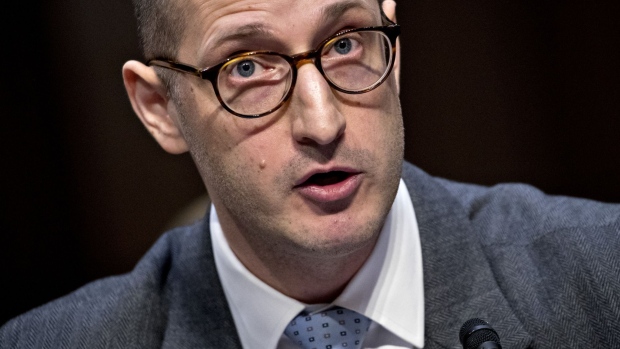 (Bloomberg) -- Republican Federal Trade Commissioner Noah Phillips said he plans to step down this fall, which will hand an even bigger majority to progressive Chair Lina Khan to advance her agenda.

Phillips told the agency last week about his plan to leave, a move that may require him to recuse himself from some cases.

“This fall is the right time for me to step down,” he said, adding that his tenure at the FTC was the “honor of the lifetime.” He didn’t specify which month he plans to leave.

His departure will take the five-member commission down to four, with three Democrats and one Republican.

A commissioner since May 2018, Phillips had been a reliable GOP vote against several of Khan’s initiatives, including a revamped monopolization case against Meta Platforms Inc. over its Instagram and WhatsApp acquisitions, and rulemakings, such as one in the works that would outlaw non-compete clauses in employment contracts.

Phillips and his GOP colleague, Christine Wilson, had been able to slow some of Khan’s work early in her tenure while the agency was evenly split between Republicans and Democrats. That deadlock ended in May when the Senate confirmed a third Democrat to the agency.

Khan thanked Phillips for his service and said “his deeply thoughtful and lively contributions have enriched the agency’s work, and I’ve greatly enjoyed working with him.”

Various conservative groups have started jockeying over a potential replacement for Phillips, which could take months.

The next nominee must be “someone who will seriously enforce antitrust laws against big tech companies,” said Garrett Ventry, a GOP tech critic and former aide to Colorado Republican Ken Buck, a key sponsor of the tech antitrust legislation pending in Congress. “The next Republican nominee must be someone with a proven track record of bipartisanship, someone who will take on Big Tech’s anticompetitive behavior and not sit idly by as they crush small businesses.”

The US Chamber of Commerce -- the nation’s biggest business lobby, which sued the FTC last month over what it alleges is a lack of transparency in the agency’s decision making -- pushed for the next Republican nominee to replicate what it called Phillips’ “principled” approach.

“His replacement must be of the same mindset to hold the agency accountable, ensure it operates transparently, and prevent it from overstepping its regulatory authority,” said Neil Bradley, executive vice president and chief policy officer at the Chamber, whose members include AT&T Inc., Pfizer Inc. and tech giants Alphabet Inc., Amazon.com Inc. and Meta.