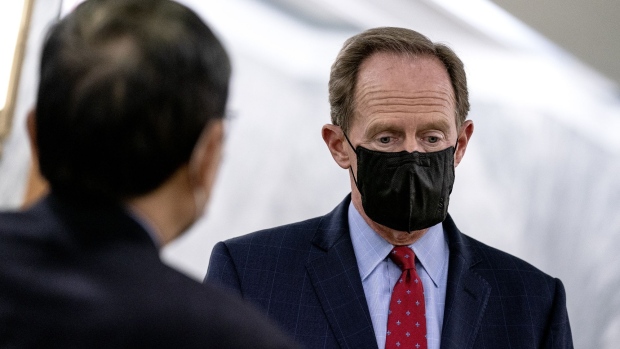 Senator Pat Toomey, a Republican from Pennsylvania, speaks to a member of the media while exiting the Senate Republican policy luncheon at the Hart Senate Office building in Washington, D.C., U.S., on Thursday, Nov. 12, 2020. Senate Republicans this week released 12 bills to fund the government through next September, the first move toward negotiations with House Democrats that will be vital to avoiding a federal shutdown next month. , Bloomberg

(Bloomberg) -- Republican Senator Pat Toomey said President Donald Trump “has exhausted all plausible legal options” in Pennsylvania, and that it was time for Trump to concede that Joe Biden won the presidential election.

“President Trump should accept the outcome of the election and facilitate the presidential transition process,” Toomey said in a lengthy statement Saturday night after a Trump campaign lawsuit that challenged the Pennsylvania vote was thrown out. The campaign has vowed to appeal.

The Pennsylvania senator noted that the judge in the case, Matthew Brann, was “a longtime conservative Republican,” even though he was appointed by President Barack Obama, a Democrat.

The “ruling follows a series of procedural losses for President Trump’s campaign,” Toomey said, including a hand recount confirming Trump lost Georgia. He also cited Michigan, where, he said, “lawmakers rejected the apparent attempt by President Trump to thwart the will of Michigan voters and select an illegitimate slate of electoral college electors.”

Toomey warned that Trump’s actions now risk overshadowing what the Republican senator described as “outstanding accomplishments” over the past four years.

“Joe Biden won the 2020 election and will become the 46th President of the United States,” said Toomey, who has announced he will not run for re-election in 2022. “I congratulate President-elect Biden and Vice President-elect Kamala Harris on their victory.”

Earlier, Representative Liz Cheney of Wyoming, chair of the House Republican Conference, said it was time for Trump to respect “the sanctity of our electoral process.”

“f Trump cannot prove the claims of widespread fraud that he and his lawyers have made, “he should fulfill his oath to preserve, protect and defend the Constitution of the United States,” Cheney said in a statement reported by Politico.

Only a few other GOP senators have distanced themselves from Trump’s attempts to reverse or discredit the outcome of the election.

Senator Mitt Romney of Utah issued the strongest rebuke, saying that by pressuring state and local officials to subvert the will of the people and overturn the election, “it is difficult to imagine a worse, more undemocratic action by a sitting president.”

Trump’s efforts -- including bringing Michigan state GOP lawmakers to the White House on Friday -- may prove to be a bridge too far for some Republicans, who mostly have been tolerant of the president’s extended legal challenges.

Most GOP lawmakers have not yet recognized Biden as the winner of the Nov. 3 election.