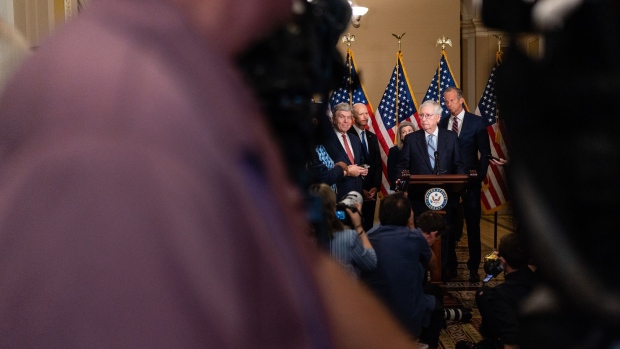 Senate Minority Leader Mitch McConnell, a Republican from Kentucky, speaks during a news conference following the weekly Republican caucus luncheon at the US Capitol in Washington, D.C., US, on Tuesday, Sept. 20, 2022. House and Senate leaders are entering a final round of negotiations on a plan to fund the government through the fall and head off a shutdown threat by the end of this month. , Bloomberg

(Bloomberg) -- Senate Republicans blocked an effort by President Joe Biden and congressional Democrats to require the disclosure of large campaign donations to so-called dark money groups, which have played an increasing role as the parties battle for control of Congress ahead of the midterm elections.

The 49 to 49 procedural vote on the legislation, short of the 60 needed to advance it, marks a rare moment of agreement between the American Civil Liberties Union and the GOP, who have argued that the bill, dubbed the Disclose Act, violates the Constitution.

The legislation “would unconstitutionally infringe on the freedom of speech and the right to associational privacy,” Christopher Anders, ACLU federal policy director, said in a Wednesday letter to senators. Senate GOP leader Mitch McConnell said Thursday that the bill would “give unelected federal bureaucrats vastly more power over private citizens’ First Amendment rights and political activism.”

Democrats, however, say the two parties should work together to expose the funders of these influence campaigns.

“Every single one of us should vote yes because so many of the ills in our democracy are rooted in the primacy of dark money,” Majority Leader Chuck Schumer said before the vote. “We must rid ourselves of this foulness before it’s too late and our democracy could well become beyond saving.”

The Disclose Act authored by Democratic Senator Sheldon Whitehouse of Rhode Island would require disclosure of donations of $10,000 for campaigning purposes, as well as advocacy for and against judicial appointments. Democrats say groups that don’t have to disclose their donors helped install the new conservative Supreme Court that in June overturned the landmark 1973 Roe v. Wade decision establishing a constitutional right to abortion.

Biden’s 2020 campaign was backed by $145 million in dark money that was donated to super PACs and spent on his behalf. Most of it came from a handful of nonprofit organizations, like Future Forward USA Action and the Sixteen Thirty Fund, which don’t have to disclose donors.

That amount of dark money dwarfed the $28.4 million spent on behalf of his rival, former President Donald Trump. And it topped the previous record of $113 million in anonymous donations that backed Mitt Romney in his 2012 presidential run.

Majority Forward, another nonprofit, has allowed Democratic donors to anonymously donate $26 million for the upcoming midterms to the Senate Majority PAC, which backs Democrats. And in tight Senate races in Nevada and Georgia, dark money groups have spent more than $50 million combined -- and the groups supporting Democrats have outspent conservative groups in both races, the nonpartisan OpenSecrets.org reported this week.