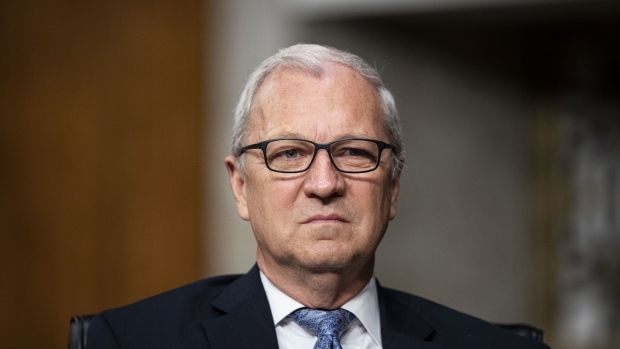 (Bloomberg) -- President Joe Biden’s remaining Federal Reserve picks can expect a tougher grilling than Chair Jerome Powell is likely to get from Senate Republicans, who are already warning about the central bank’s regulatory reach before the nominees are even announced.

The three openings on the seven-member board, including the pivotal vice chair for supervision slot previously held by Randal Quarles, give Biden the chance to dramatically reshape the Fed. He’s under pressure from progressive Democrats, who were disappointed by his renomination of Powell and are clamoring for a diverse slate that would take on the financial risks of climate change and Wall Street speculation with new regulations.

Republicans are wary. Pennsylvania Senator Pat Toomey, the top Republican on the Banking Committee, has been sharply critical of what he calls “mission creep” at the Fed on issues like climate and racial justice.

Senator Kevin Cramer of North Dakota, another committee member, said Biden’s other picks should get tough scrutiny regardless.

“None of them should be confirmed easily if they have extreme views,” Cramer said. “This isn’t a three for one -- you know, we’ll give you one if you give us three. We ought to fight hard on every single one of them.”

Toomey said last week on Bloomberg Television’s “Balance of Power with David Westin” that he hopes Biden will nominate someone to replace Quarles “who will respect the limited role they should play.”

“I’ll be looking forward to seeing who that nominee is and grilling that person about what their intentions are,” Toomey said.

With Biden saddled with sub-par approval ratings and the midterm election coming up next year, Republicans won’t be inclined to give the administration the benefit of the doubt. If Biden can’t win over Republicans in a 50-50 Senate, the fate of any nominee will depend on how he navigates the conflicting demands within the Democratic Party of progressives like Senator Elizabeth Warren and moderates like Senator Joe Manchin and Jon Tester.

Warren raised the stakes last week when she tried to pin down Powell in a hearing on whether he would allow regulations proposed by a vice chair for supervision that he disagrees with to come up for a vote. Powell told the Massachusetts Democrat that would be his intention and that it conforms to his reading of the law, though he also said he couldn’t account for every situation.

Warren took the exchange as a commitment from Powell.

“When Chair Powell says that he interprets the law as requiring that proposals from the vice chair for supervision to go forward is mandatory, I think that sounds like a guarantee,” she said in a brief interview.

The three Biden picks to come, plus Biden’s pick for vice chair, Lael Brainard, would theoretically have enough votes then to narrowly pass new regulations in the seven-member panel regardless of Powell’s views.

The Warren-Powell exchange, and the math, concerned Cramer.

“I just hope and pray that if it ever comes down to that, Jerome Powell would use whatever little wiggle room he left in the answer to that question to say ‘No, this is a bridge too far, I am the chairman and it doesn’t come up for a vote,’ or whatever it is, whatever tool he can use with the gavel and not allow that,” he said.

Cramer said some moderate Democrats might also be concerned about overreach by the Fed too and join him.

Manchin continues to press the Federal Reserve to end its bond-buying program quickly and has recently spoken to both Brainard and Powell. The West Virginia Democrat, who torpedoed a major piece of Biden’s climate legislative agenda earlier this year and has defended fossil fuels, said this week he hasn’t focused on the potential for climate regulations coming from the Fed.

Tester, who is on the Banking Committee, has backed deregulation efforts for smaller banks and has expressed wariness of the push by progressives for sweeping changes at the Fed.

Bloomberg has previously reported several names being considered by the White House for the top regulator spot, including Richard Cordray, the former director of the Consumer Financial Protection Bureau; Sarah Bloom Raskin, a former Fed governor and former deputy Treasury secretary; and Raphael Bostic, the president of the Federal Reserve Bank of Atlanta.

Other candidates for board slots include Valerie Wilson, director of the left-leaning Economic Policy Institute’s Program on Race, Ethnicity, and the Economy; Lisa Cook, a professor of economics and international relations at Michigan State University; William Spriggs, chief economist at the AFL-CIO and Karen Dynan, a former top Treasury official under President Barack Obama and an economics professor at Harvard University.

“We expect any of the nominees who have been widely discussed would likely be confirmed by the Senate, but some would lead to much messier fights with narrower, more partisan confirmation votes and greater risk of failure,” Evercore ISI analyst Tobin Marcus wrote in a note Monday.

Cordray particularly has been a target of GOP ire and his nomination would spark “an unnecessarily grueling fight, for little obvious benefit,” Marcus wrote. “He would be a slightly more exciting pick for progressives, but we believe they would also be satisfied with Bloom Raskin.”