Value trade will benefit from cyclical exposure in an econmic recovery: Money manager

It doesn’t sit well in the ivory tower, that at a time of peak complexity in markets, when a pandemic raged and a recession seethed and new-wave experiments were conducted in fiscal and monetary policy, it wasn’t the quants or the prop traders or any other blue-blooded Wall Street constituency that figured it out first. It was the amateurs.

In a year of extreme volatility, the stocks newbie traders love most have soared 56 per cent, beating the usually bulletproof S&P 500 by 45 percentage points and nearly doubling the return on hedge-fund favourites, going by Goldman Sachs data. Thanks to bets on cruise operators and airlines and electric cars, screen shots of six-figure brokerage accounts inundate Twitter, the lockdown’s accessory of choice.

The question of how it happened is moot to the winners. What matters are returns, which for day traders are high. At the same time, in the age of behavioral economics, the financial world is obsessed with diagnosing the biases and talents that explain investing success. In that context, two theories are usually proffered to explain the retail phenomenon of 2020:

1. Unencumbered by risk controls and unconcerned with how their decisions would look to others, quarantined amateurs flush with time and government money were simply freer than their suited counterparts to act at the March bottom. They correctly surmised that a recovery would catapult the companies that bore the brunt of the plunge, “bought low” and reaped rewards equal to their daring.

2. Believing a US$5 price tag made a stock cheap and US$1-a-share must be the bargain of the century, newbie day traders made virtually every error amateur investors are capable of, including mistaking bankruptcy filings as buy signals in penny stocks. Egged on by Twitter impresarios whose main expertise was aggregating followers, everyone got fantastically lucky when the Federal Reserve and happenstance caused virtually every one of the decisions to pay off -- over what remains far too short an interval to judge skill. 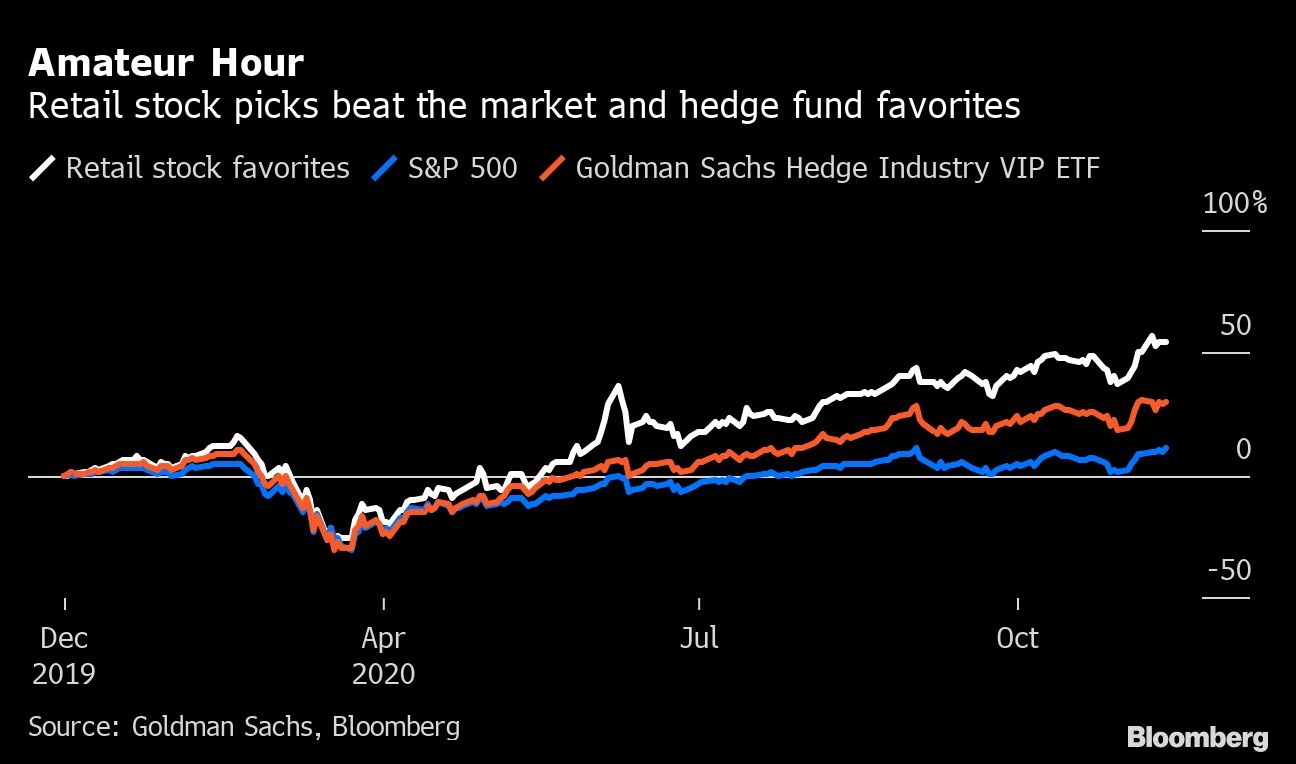 Ask the day traders, and they’ll say they know what they’re doing. Assailed by the pros for believing stocks only go up, they point out that in a year when 60 per cent of sessions have been positive, closing your eyes and buying has been exactly the right investment model. Already, 235 days have gone by since the bottom of the quickest fall into a bear market ever and US$11 trillion in equity value has been added. Still, the suits see it ending in tears.

“You get in, you open up a Robinhood account, make a few successful trades and you ride the trends,” says Giorgio Caputo, senior fund manager at J O Hambro Capital Management. “The risk is that someone might get lucky, and unfortunately they may put too much emphasis on what ultimately was a lucky outcome.”

If conviction is part of the talent calculus, newbie traders have it. At least 8 million new accounts have been opened in 2020 across brokerages including Charles Schwab Corp., E*Trade Financial, TD Ameritrade Holding Corp. and Robinhood Markets Inc., all of which permit some version of free trading. Altogether, retail traders now make up a fifth of equity trading volume, second only to infrastructure providers like market makers and high-frequency traders, according to Bloomberg Intelligence’s Larry Tabb. The share of small options trades -- a telltale sign of retail interest -- has more than doubled.

And while always enthusiastic, amateur day traders take as much pride in their ability to admit when they had something wrong and adapt. Like everyone else, in the chaos of February and March, they took lumps, but they claim they didn’t let blind faith keep them from changing course in a way that might be difficult for an institutional manager.

Ayden McCloskey, 22, says he learned on the fly. The construction worker and Doordash delivery driver in Minnesota claims he lost US$20,000 shortly after he started day trading in March. “I fought the Fed for too long,” he says. “That was something, as a newbie, that I shouldn’t have done.” So he changed course -- and made it all back. He says this agility makes investing fun in a way it can never be for a Wall Street veteran. “It really is my life,” he says. The pros “burn out because of the pressure.”

Exactly how long the good months will last is something Wall Street’s old guard is skeptical of. As of now, says Dan Egan, managing director of behavioral finance and investing for Betterment LLC, the retail hot streak hasn’t lasted long enough to say anything definitive about it.

“It’s been an easy market to think that you’re a genius in,” he said. “It will be interesting to see if those people who have been playing a very simple version of the stock market game, if they are going to say, ‘Oh, I just got lucky that I was in during a period when these things were going on,’ versus, ‘I actually have some ability to play the market in all environments.’” 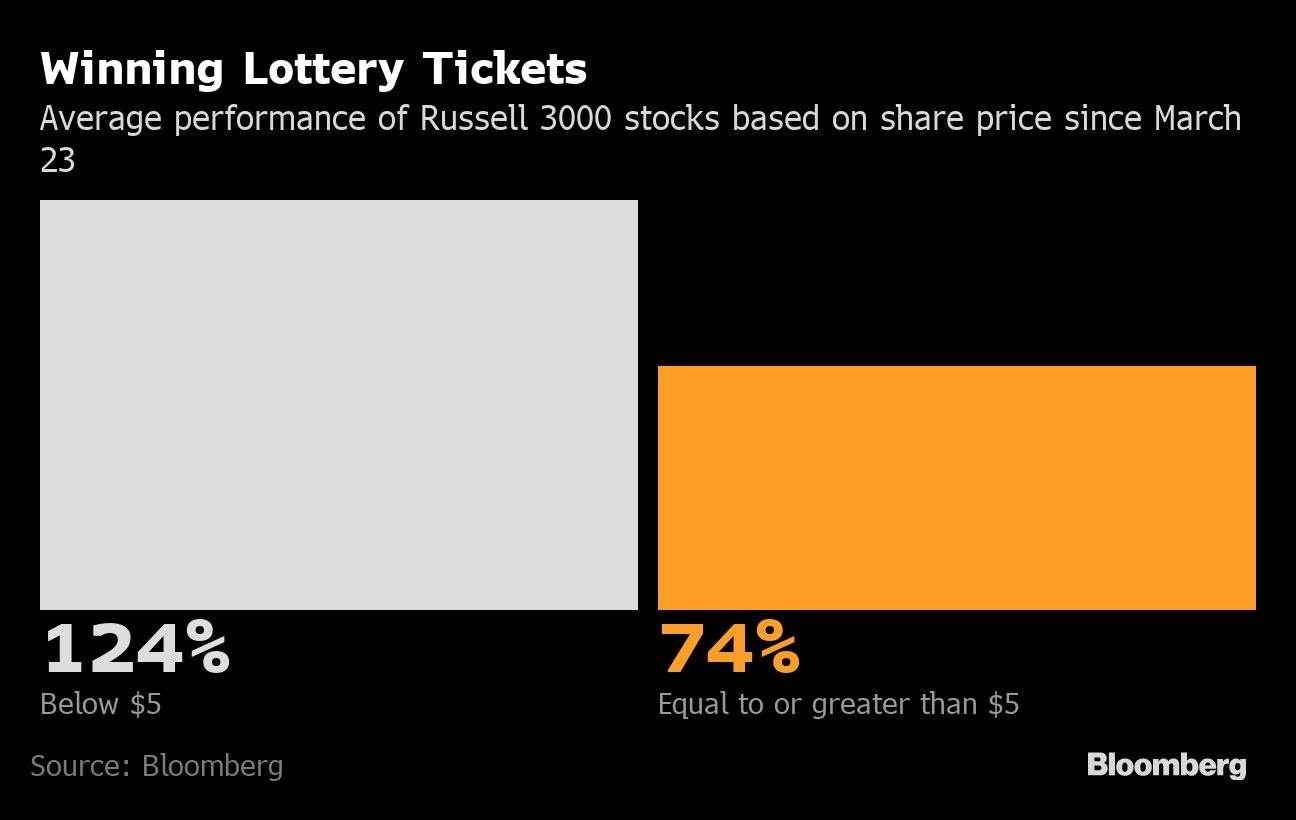 Quantitatively speaking, a good summer comes nowhere near proving anyone has investing skill. In a 2017 paper titled “What’s Past is NOT Prologue” by James White, Jeff Rosenbluth and Victor Haghani of Elm Partners Management, the trio suggested that even two decades of performance isn’t enough to fully distinguish a fund manager is anything other than average.

Still, you must give credit where it’s due, says Julian Emanuel, chief equity and derivatives strategist at BTIG. Retail investors rode the waves for months. While Wall Street counseled prudence, some of the stock market’s highest fliers went on to gain another 20 per cent. Tesla Inc. surged 80 per cent in August, adding to what was already a 240 per cenr year-to-date gain. Shares of Zoom Video Communications Inc. doubled in the month alone. Apple Inc. added a cool US$400 billion to its ballooning market-cap.

“The public can be credited for outperforming the markets simply because there was what we would call a suspension of disbelief and a willingness to stick with the trend,” Emanuel says. “We wouldn’t call that luck. In certain environments, that’s a tragic flaw, but in 2020 that has been a strength.”

While the S&P 500 has swung an average of 1.5 per cent a day in 2020, the second most of the last seven decades behind 2008, data compiled by Bloomberg show, the trend on a day-to-day basis has been remarkably constant in its direction: higher. Either despite or because of that, only 39 per cent of large-cap active fund managers are beating their benchmarks, data from Jefferies LLC show.

It’s led to bravado that people could easily end up regretting. Jaylon Graves, 25, claims he’s made tens of thousands of dollars trading biotech, marijuana and penny stocks. He targets equities with a price tag below US$15, using technical analysis.

“I would say 95 per cent of it is skill. Trying to day trade with luck is a crash course,” he said from Dallas, acknowledging he’s still a beginner. “If you don’t know how to manage your risk-reward, you are going to fail. There is no way to be a lucky day trader just because of how hard day trading is.”

The market itself has cooperated to an uncanny extent with certain day-trader appetites. On March 23, the day stocks bottomed after the Covid crash, more than 420 stocks in the Russell 3000 carried prices below US$5. Since then, those shares have surged an average 124 per cent, data compiled by Bloomberg show. Meanwhile, companies with a share price above US$5 have gained an average 74 per cent. A solid return, either way, if you had the foresight to buy at the bottom, but an even bigger win for lovers of lottery tickets.

Robinhood clients bought the dip in March, with daily trading volume three times what it was in the fourth quarter of 2019 and net deposits 17 times the monthly average that same quarter, according to a Robinhood spokesperson. At TD Ameritrade, clients were net buyers in March, “way before the rest of the market,” says the firm’s chief market strategist JJ Kinahan, and they’ve remained so since. Client data shows users of TD Ameritrade, especially millennials, gravitated to travel stocks at the bottom.

At E*Trade, “traders acted quickly to buy the dip and position for a rebound, moving into sectors associated with a growing economy,” said Chris Larkin, the firm’s managing director of trading and investment product.

These newbie traders have also been doing their homework. Visits to Robinhood Learn -- Robinhood’s educational offering -- were up 250% through June. TD Ameritrade has seen record use of its educational resources in 2020, up more than three times the amount seen last year. Schwab has seen upwards of 100,000 clients a month access its Learning Center.

Zilla Saldana, 33, is one of them. She’s only been trading for a few months, but she says she hasn’t made a single trade without doing her research first. First, she bought Apple Inc. Then she branched out to the likes of electric vehicle stocks.

“I wouldn’t say I got ‘lucky’,” Saldana said from Florida. “I would say I did research and chose stocks based off of my findings. I’ve done pretty well.”

Whether the retail investing boom is a short-term fad or a long-term trend is still up for debate. To the professionals, all the euphoria may amount to a negative signal for markets, but knowing when to back down isn’t easy.

“We say that’s a contrarian single. When the casino starts printing money for the gamblers, there’s something wrong going on,” said Peter van Dooijeweert, managing director of multi-asset solutions at Man Solutions. “But if you read 1999 as a short call for the market, you might’ve gotten fired six times before the market collapsed in 2000.”