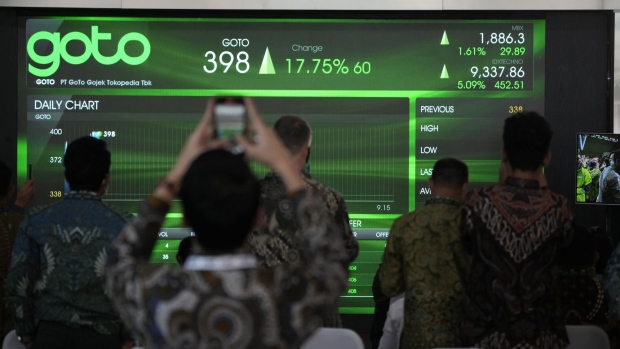 An electronic board displays stock prices of Goto Group at the lobby of the Indonesia Stock Exchange (IDX) in Jakarta, Indonesia, on Monday, April 11, 2022. GoTo, Indonesia’s biggest tech company, surged on its first day of trading after raising $1.1 billion in one of the world’s largest initial public offerings this year. Photographer: Dimas Ardian/Bloomberg , Bloomberg

(Bloomberg) -- Indonesia’s largest internet company GoTo Group is planning to cut more than 1,000 jobs as it seeks to trim costs and shore up its finances, according to people familiar with the matter.

The reduction, equal to more than 10% of the workforce, will affect all divisions, said the people, who asked not to be identified as the deliberations are private. Shares of the company rose as much as 9.6% in Jakarta, the biggest intraday gain in almost two months.

GoTo joins tech giants from Meta Platforms Inc. to Apple Inc. that are cutting staff or pausing hiring after years of heady expansion succumbed to a global economic downturn. Job cuts in the technology industry are nearing levels seen in the early stages of the Covid-19 pandemic, as companies both large and small curtail ambitions and brace for tough times ahead.

The ride-hailing, e-commerce and fintech company and its publicly traded peers such as Sea Ltd. and Grab Holdings Ltd. -- all of which are loss-making -- have seen valuations drop as they navigate an economic slowdown, rising interest rates and accelerating inflation. GoTo executives have said they are trying to balance spending on growth with its effort to reach profitability.

The Jakarta-based company, which also operates in Singapore and Vietnam, may announce the cuts to its employees in the coming weeks, the people said. The size of the reduction may change, they said. A representative for GoTo declined to comment.

GoTo is initiating the staff cuts as it prepares to unveil quarterly results on Nov. 21. In August, it reported its second-quarter adjusted loss before interest, taxes, depreciation and amortization widened to 4.14 trillion rupiah ($264 million) from a pro-forma loss of 3.9 trillion rupiah a year earlier.

Formed through a merger of ride-hailing provider Gojek and e-commerce firm Tokopedia, the company went public in April in one of the year’s biggest initial public offerings and its shares have lost about 40% since. GoTo has said it is in talks with its owners for a controlled sale of their stakes, seeking to avoid a potential stock slump when a lock-up on their holdings ends on Nov. 30.