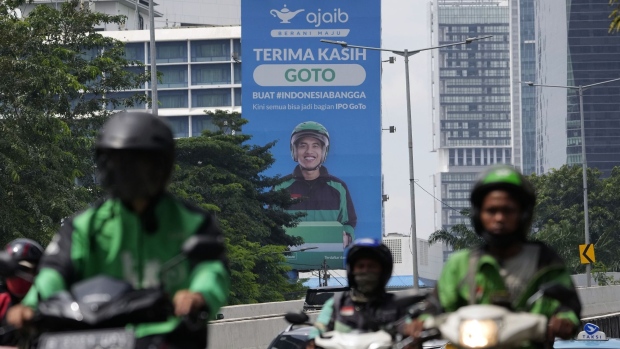 Motorcyclists travel past a billboard advertising GoTo's initial public offering in Jakarta, Indonesia, on Friday, April 8, 2022. GoTo, formed through the merger of Gojek with e-commerce pioneer Tokopedia, raised $1.1 billion in one of the world’s biggest stock debuts this year and is slated to list in Jakarta April 11. Photographer: Dimas Ardian/Bloomberg , Bloomberg

(Bloomberg) -- GoTo Group said it has enough funds to last until it reaches profitability, trying to alleviate investor concerns about its financial health following a 70% slump in its stock price.

“Our balance sheet is sufficiently healthy to take us to profitability,” Chief Financial Officer Jacky Lo told investors in an online meeting on Thursday. The Indonesian internet company expects “to be able to accelerate” its breakeven timeline, will curb expenses and is considering selling non-core assets, he said.

Shares of GoTo have suffered as a lockup on its major shareholders’ stakes expired at the end of November, freeing early backers to reduce their holdings. The ride-hailing and e-commerce provider faces intensifying competition from rivals such as Grab Holdings Ltd. and a deteriorating global economy. GoTo is about six quarters away from a cash crunch, Aletheia Capital said, recommending investors sell the stock.

GoTo said last month it’s cutting 12% of its workforce, or 1,300 jobs, after its losses mounted. Like technology companies worldwide, GoTo is confronting the effects of stiffer competition, economic slowdown and heightened investor focus on the bottom line. The risk of customers becoming more budget-conscious in the face of an impending recession has triggered job cuts, closures of business units and other measures across the tech industry.

“We will continue our disciplined approach to reducing operating expenses, which we are confident will result in continuous sequential improvement in our monthly cash burn,” Lo said. “We may also consider divesting some of our non core assets and also investment portfolio and we will not make any new investments that do not contribute to an acceleration of our profitability.”

The stock plunged by 6.5% to 100 rupiah in Jakarta trading — close to the daily limit — leaving it down 70% since its April debut. Indonesia’s largest tech company now has a market value of about $7.6 billion.

Early backers such as Alibaba Group Holding Ltd. and SoftBank Group Corp. were held to an eight-month lockup expiring Nov. 30 to support the stock price following the company’s initial public offering. GoTo’s plan to facilitate controlled stake sales by pre-IPO backers — aimed at avoiding a bigger selloff at once — didn’t come to fruition.

Formed via a merger of ride-hailing provider Gojek and e-commerce firm Tokopedia, GoTo raised $1.1 billion in one of this year’s largest IPOs.