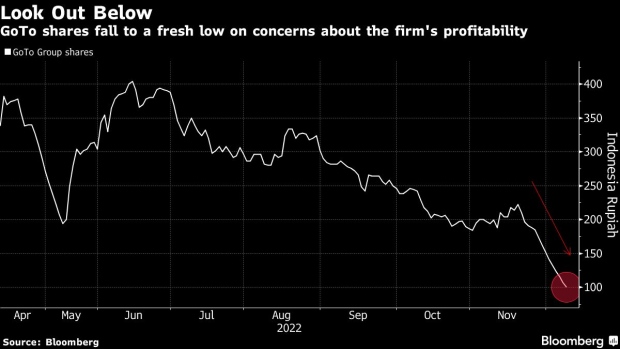 The stock fell for a 15th straight day, hurt by the expiry of a lockup on its major shareholders’ stakes that freed them to reduce their holdings. Management held a meeting with investors on Thursday in which it said it has enough funds to last until it reaches profitability and that it’s considering asset sales — comments that did little to halt the stock’s slide.

The shares dropped by 7% on Friday — the daily limit — to a record low 93 rupiah (less than 1 US cent) in Jakarta trading. Indonesia’s largest tech company now has a market value of about $7 billion.

“The market seems to be concerned that the measures they talked about yesterday such as the disposal of assets may not be enough to stem the cash leak,” said Nirgunan Tiruchelvam, analyst at Aletheia Capital Ltd. “The lock-up expiry, which a vast majority of shareholders were subject to, means that the investors that could sell, are selling.”

Friday’s decline left GoTo’s stock down 72% since its April debut. The ride-hailing and e-commerce provider faces intensifying competition from rivals such as Grab Holdings Ltd. and a deteriorating global economy. GoTo is about six quarters away from a cash crunch, Aletheia said earlier this week, recommending investors sell the stock.

“The main concern is the long way to profit,” said Alexander Yasa, an analyst at Sucor Asset Management. “No matter how cheap the stock is, people are reluctant to buy because its book value continues to decline.”

GoTo said last month it’s cutting 12% of its workforce, or 1,300 jobs, after its losses mounted. Like many technology companies worldwide, GoTo is confronting the effects of stiffer competition, economic slowdown and heightened investor focus on the bottom line. The risk of customers becoming more budget-conscious in the face of an impending recession has triggered job cuts, closures of business units and other measures across the tech industry.

The tough market conditions mean that GoTo may face difficulties in gaining financing through options such as selling more shares or issuing convertible bonds, Tiruchelvam said.

Early backers such as Alibaba Group Holding Ltd. and SoftBank Group Corp. were held to an eight-month lockup expiring Nov. 30 to support the stock price following the company’s initial public offering. GoTo’s plan to facilitate controlled stake sales by pre-IPO backers — aimed at avoiding a bigger selloff at once — didn’t come to fruition.

Formed via a merger of ride-hailing provider Gojek and e-commerce firm Tokopedia, GoTo raised $1.1 billion in one of this year’s largest IPOs.

--With assistance from Ishika Mookerjee and Soraya Permatasari.