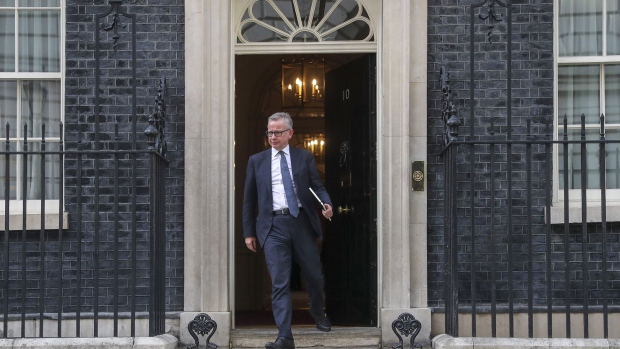 The U.K. still wants to reach a trade agreement with the European Union and the door is open for more negotiation, Cabinet Office minister Michael Gove said.

“I want a deal, I’m keen to conclude one, but it takes two sides,” Gove told Sophy Ridge on Sky News on Sunday. “If the choice is between accepting a deal in which our hands are tied,” or leaving without an agreement, then “we have to take back control.”

Crunch talks ended this week with the U.K. saying that the EU would have to make more compromises if they are to continue. Gove said the door “is ajar” for EU Chief Negotiator Michel Barnier to come to London next week to continue negotiations before the transition period expires at the end of the year.

Leaving on what the government calls Australian terms wouldn’t “be a picnic,” Gove told the BBC, though it’s prepared to do so. He said the EU had retreated from progress already made, and in an op-ed for the Sunday Times, he wrote that the U.K. won’t give in to the EU now.

In another Sky News interview, British Chambers of Commerce chief Adam Marshall stressed that no-deal is “not the preferred outcome” for businesses. Negotiations look like “pantomime theater,” he said.