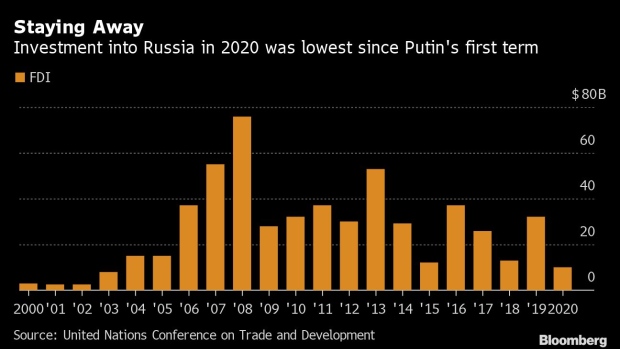 An engineer holds a bunch of network cables at the BitCluster cryptocurrency mining farm in Norilsk, Russia, on Sunday, Dec. 20, 2020. Norilsk may soon be famous for a different type of mining — it now hosts the Arctic's first crypto farm for producing new Bitcoins. , Bloomberg

The Russian government is pushing to permit cryptocurrencies in part to help attract foreign investment, even as the central bank warns they could be used for illegal activity.

Legalizing crypto would eliminate operations that currently take place in the gray economy and help the government monitor the industry, Finance Minister Anton Siluanov said in a Feb. 2 letter to Prime Minister Mikhail Mishustin seen by Bloomberg. A ministry spokesperson declined to comment on the letter.

The government later published an outline of how to regulate the market that would permit domestic trading in order to bring it out of the shadows.

“We need to create clear and transparent rules for the participation of citizens and businesses in the financial instruments of the crypto market,” Deputy Finance Minister Alexey Moiseev said in a statement to journalists Monday. “Clear regulation excludes the possibility of a parallel financial system appearing.”

The plan faces opposition from the central bank, which says crypto bears the hallmarks of a pyramid scheme and could be used for illegal financial transactions. The regulator has recommended a ban on its mining and use.

“The approaches proposed by the government do not yet allow neutralizing the risks that we see, and at the same time they create new threats,” Bank of Russia Governor Elvira Nabiullina said at a press conference Friday. “We see significant risks here and I hope good sense prevails.”

President Vladimir Putin in January called on the authorities to reach a compromise.

Allowing trade would likely lead to an influx of foreign investors as they seek to acquire crypto mined in Russia, according to Siluanov’s letter. Currently, the lack of a regulatory framework or clear taxation rules means that business is conducted abroad, he wrote.

Russia last year became the world’s third biggest crypto miner, after the U.S. and Kazakhstan, according to Cambridge University data released in October.

Russia has seen foreign investment slump since the Kremlin annexed the Crimea from Ukraine in 2014, triggering Western sanctions. Foreign direct investment in 2020 was the lowest since 2003.

The push to codify rules regulating Russia’s booming crypto scene comes as the the U.S. and European Union are preparing harsh potential sanctions in the event of an invasion of Ukraine. The Kremlin denies it plans to attack its neighbor and has demanded security guarantees from the West to de-escalate the crisis.

Russia’s existing laws acknowledge crypto assets but do not allow them to be used as payment, a situation that has helped cloud the understanding of the size of the domestic market. Officials have estimated Russians’ crypto holdings at anywhere from 2 trillion rubles to 16.5 trillion rubles ($27 billion to $220 billion).

Legalizing cryptocurrency could help Russia’s investment case, which suffers from a lack of venture capital due to the conflict with the West, according to Andrey Mikhailishin, the chief executive of Moscow-based Joys payment service that allows users to pay with digital currencies.

“The political agenda has had virtually no effect on the crypto market,” said Mikhailishin, who estimates transparent regulation could attract $3.5 billion in investment in 2022. “Investing in cryptocurrencies today is one of the most accessible and largest venture capital markets for Russian IT projects.”