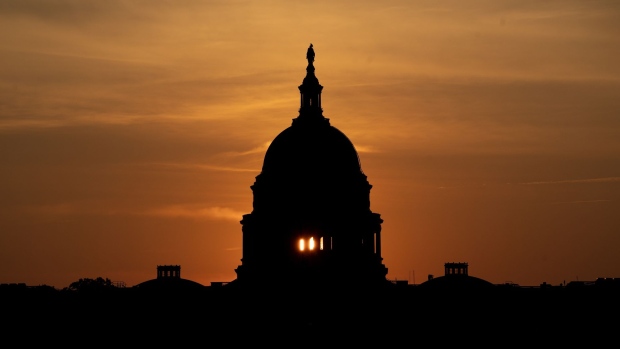 (Bloomberg) -- Democrats continued to wrestle Monday over details of a stopgap spending bill to keep government operating after Sept. 30, delaying the expected release of the bill that could serve as a vehicle to raise or suspend the federal debt ceiling.

The House is scheduled to vote on the spending measure this week, with the deadline to avoid a government shutdown at the end of the month. But there was no text posted or circulated when the Rules Committee began a hearing scheduled to set up votes on that and several pieces of legislation on the House floor in the coming days.

But Republicans have said they won’t vote to raise the debt ceiling as long as Democrats are pressing ahead with a partisan tax and spending plan encompassing much of President Joe Biden’s economic agenda. The White House and congressional Democratic leaders have insisted that the debt limit vote should be bipartisan.

The congressional standoff over the debt ceiling was one of the factors driving a broad selloff in global markets Monday, along with jitters about China extending a property clampdown and speculation about whether the Federal Reserve later this week will indicate whether it will move toward scaling back monthly asset purchases.

Democrats had no answer for Oklahoma Representative Tom Cole, the top Republican on the Rules Committee, when he asked when the spending bill would be ready.

“We will update the committee as soon as that information becomes available,” Democratic Representative Norma Torres of California, who was presiding, responded.

The funding measure is likely to last sometime into early December. Supplemental funding to aid victims of recent natural disasters and money for resettlement of Afghans refugees also is expected to be included in the stopgap funding bill, known as a continuing resolution.