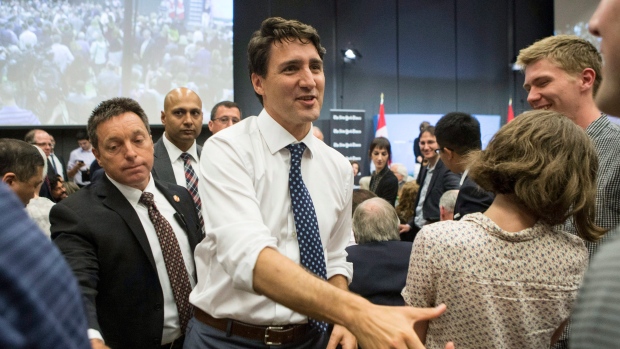 OTTAWA -- Prime Minister Justin Trudeau argues that his Liberal government has been keeping its promise to be fiscally responsible but the previous Conservative administration is at least partly to blame for higher than expected deficits.

Trudeau said Tuesday that the Liberals spent about $10 billion in 2016-17, their first full year in office, precisely as promised in the 2015 election platform.

But he insisted the Liberals had to deal with a baseline budget deficit of $18 billion after they came to power, even though their Conservative predecessors had predicted a balanced budget.

The Tories have long disputed Liberal claims that they left the country in the red following their election defeat, which came part way through the 2015-16 fiscal year.

In trying to make his case Tuesday, Trudeau revisited a bitter political debate over the post-election state of the public books that has raged between the Liberals and the Tories long after the election.

"We just went from a floor where the budget was balanced, because supposedly the Conservatives had balanced the budget, to what was the reality of our budget of being at about $18 billion in deficit at the end of that first year," Trudeau told a news conference.

"So, we've been consistent with our plan and our approach."

After the Liberals took over, Ottawa ended up posting a deficit of $1 billion for 2015-16. The Harper government had projected a $1.4-billion surplus for that year.

Trudeau appeared to be referring to the 2016-17 fiscal year, his government's first full year in office, in claiming the Conservatives left with an $18 billion deficit.

Each party held power for several months in 2015-16, a year marked by economic disappointment primarily linked to the weak global economy and low oil prices.

The Tories blame the eventual shortfall on fresh spending by the Liberals. They point to a report last October by the parliamentary budget officer, which said Ottawa was likely on track to run a surplus in 2015-16 had it not been for new spending on measures like enriched veteran's benefits.

The Trudeau government has been criticized for a budgetary outlook that projects several years of deficits, including a shortfall of $23 billion for 2016-17. This year, the government is predicting a deficit of $28.5 billion, including a $3-billion accounting adjustment for risk.

Trudeau maintained Tuesday that he's focused on making investments to lift the economy and vowed to remain fiscally responsible when it comes to spending.

The prime minister refused once again, however, to say when the books would be balanced.

"We made the decision ... in the last election that instead of focusing on balancing the books arbitrarily, and at all costs, we would focus on the investments needed to grow the economy," he said, referring to the Liberal plan to run deficits in order to invest billions in areas like infrastructure.

The Liberals won the election with a pledge to run annual shortfalls of no more than $10 billion over the first three years of their mandate and to eliminate the deficit by 2019-20.

The latest federal budget does not project when the deficit will be eliminated and forecasts shortfalls across its outlook, which only extends until 2021-22.

A federal report, published on the Finance Department website in December, predicted that, barring any policy changes, Ottawa could be on a path filled with annual deficits until at least 2050-51.