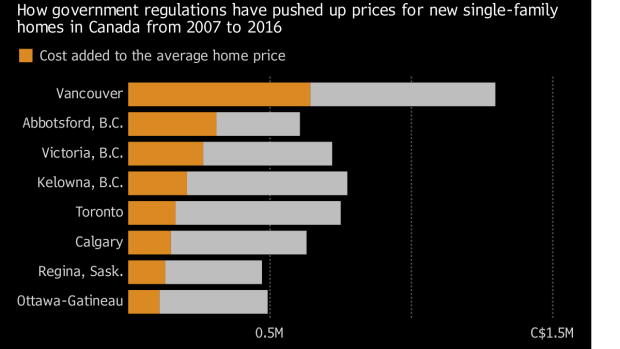 Zoning rules, delays on permit approvals and municipal development fees all contributed to a steep increase in prices of single-family detached houses across Canada, C.D. Howe said in a report Tuesday. The study focused on eight areas -- including Toronto, Calgary, Vancouver and Ottawa-Gatineau -- where new-home prices are more than 20 percent higher than the cost of construction. In those cities, barriers to homebuilding added an average of C$229,000 ($179,000) to the price of a house from 2007 to 2016, the group said.

The impact was greatest in Vancouver, where buyers paid an extra C$644,000 on average for a new house, or about half of the total price. That proportion is equivalent to what other studies have found for Manhattan, C.D. Howe said.

“A well-functioning housing market results in the market price of housing being close to the feasible cost of constructing it,” the group said in the report. “If prices persistently exceed this construction cost, it is often due to barriers that inhibit new construction. These barriers often stem from excessive regulations.”

Vancouver and Toronto, two of the country’s costliest markets, have seen prices for all homes soar 81 percent and 64 percent, respectively, over the past five years, according to March data from the Canadian Real Estate Association. Demand for housing outstrips supply in both cities, where prices have remained high despite government policies to tame the increases, such as taxes on foreign buyers and stricter mortgage rules.

Barriers to building new homes result in higher prices for existing ones, too, as buyers are left to battle for a reduced supply of housing. The C.D. Howe study found that barriers to development have added more than C$100,000 on average to prices for both new and resale homes in some Ontario municipalities.

--With assistance from Natalie Obiko Pearson .

To contact the reporter on this story: Natalie Wong in Toronto at nwong133@bloomberg.net.

To contact the editors responsible for this story: Daniel Taub at dtaub@bloomberg.net, Christine Maurus