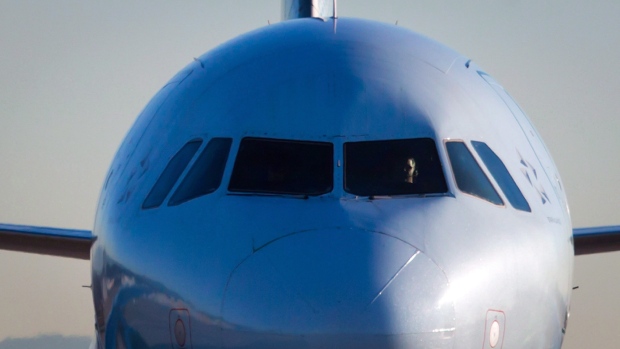 A pilot taxis an Air Canada Airbus A320-200 to a gate after arriving at Vancouver International Airport in Richmond, B.C., on Monday February 3, 2014. Parents of young children and a national Muslim group are welcoming a federal budget commitment to address fairness and privacy concerns with Canada's no-fly list. , THE CANADIAN PRESS/Darryl Dyck

MONTREAL -- A new study suggests federal and provincial governments can help ease some of the frustrations of travellers and grow the country's air transport sector by reducing taxes and fees imposed on the industry.

In his study, Moreau writes that comparatively high airport rents and security charges, coupled with provincial taxes, are restricting the potential for growth in the country's air transport sector.

Canada is ranked 31st out of 32 countries in the Organisation for Economic Co-operation and Development (OECD) for the competitiveness of airport fees and taxes.

Moreau says Transport Canada collected $349 million in the 2016-17 fiscal year in airport rents and over the past five years, the federal government collected $404 million more in security fees than it spent on security-related expenses during the same period.

Moreau says in an interview that research indicates consumers are sensitive to modest price decreases, especially for tourism-related travel, adding that a one per cent decrease in the price of a ticket corresponded with a 1.3 per cent to two per cent increase in demand.

"If we reduced the burden of taxes and fees that weighs down the air transport sector, the resulting increase in economic activity and tax revenue would likely compensate for at least a portion of the lost government revenue," Moreau said.

Every year, federal and provincial governments collect more than $1.5 billion from airlines and airports.

By reducing taxes and fees, Moreau said airlines could lower prices, which would spark increased demand for flights and more revenues for airlines.

A higher demand for flights makes it easier and potentially more profitable for smaller and lower-cost airlines to enter the market, he said.

Airline ticket prices are felt acutely in Quebec, with many people living outside big cities stuck with airline monopolies and high prices for domestic flights.

Moreau said, however, the Quebec policy could end up increasing fares over the long term.

"With subsidies for airplane tickets, it's possible the flights stay the same price or even increase because the companies know consumers will have high purchasing power," he said.