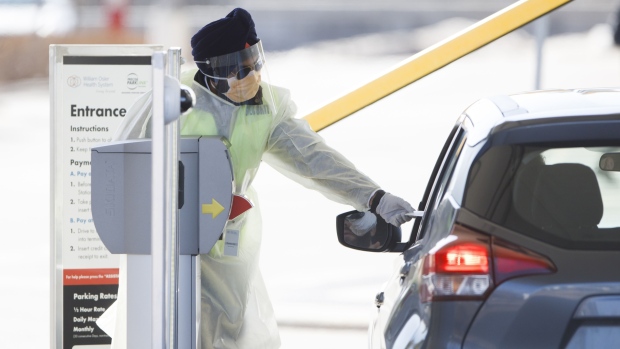 TORONTO - The two-pronged battle to contain the spread of COVID-19 while inoculating the economy from the drastic fallout of the pandemic saw governments on Tuesday rush to ease concerns of financial hardship even as they tightened restrictions on people and businesses that could last for weeks.

With large swaths of normal work and recreational life grinding to a halt, the federal government looked to pass emergency legislation aimed at allowing for $82 billion in direct spending and deferred taxes.

Speaking from outside his home in Ottawa, Prime Minister Justin Trudeau acknowledged people need direct financial help quickly as a result of what he called the “biggest health crisis our country has ever seen.”

“The demand is massive across the country,” Trudeau said ahead of an emergency sitting of a much reduced House of Commons.

The Opposition Conservatives said they would support measures to help Canadians, but would not grant the Liberal government a “blank cheque.”

The Canadian government, as is happening around the world, is hoping that a massive injection of money will help douse the flames of a raging financial fire. A statement from G7 finance ministers and central bankers said the group would do “whatever is necessary” to restore economic confidence and protect jobs and businesses.

Financial markets, slammed by the pandemic, recovered some of their massive losses on Tuesday

To help cushion the financial fallout, Ontario Premier Doug Ford announced a cut in electricity rates given the large numbers of people now working from home. Ford said a switch to only lowest off-peak pricing for residences, farms and small businesses would be in place for the next 45 days.

He also warned he would shut down construction sites and other workplaces that didn't follow public-health guidelines.

Trudeau said it was impossible to say how long emergency measures aimed at slowing the spread of the virus would need to stay in place. He warned of “much more stringent measures” if people don't voluntarily heed urgent pleas to self-isolate.

“The duration of this crisis will be determined by the choices we make right now,” Trudeau said. “Do your part: Stay home.”

The prime minister said one million people returned to Canada this past week even as he announced further flights to repatriate Canadians stranded abroad.

States of emergency are now in effect across Canada. Ontario and Quebec announced the complete closure of non-essential businesses and services as of midnight tonight. The two provinces had also considered closing their common border but Ford suggested such a measure would be impractical.

Signs of the economic impact were easily found. With severe restrictions on international travel, hundreds of Air Canada pilots were going on unpaid leave, while thousands of others agreed to pay cuts, their union said. Bombardier Inc. said it was suspending production in Canada and stopping all non-essential work.

The various measures come as the number of COVID-related fatalities in Canada reached 25 amid a case-load approaching 2,200. The country's chief medical health officer, Dr. Theresa Tam, said as many Canadians testing positive have contracted the virus from travel as from community transmission.

Paramedics, forced to take cumbersome steps to protect their own health, warned of being stretched too thinly by more calls for help in some areas than ambulances to handle them.

Public health authorities say some people infected with the highly contagious COVID-19 virus may have no signs, while most experience mild or moderate symptoms, such as fever and cough. Most recover. However, for Canadians over 65 or with less than optimal health, the respiratory illness can be lethal.

To prevent its spread, experts advise frequent hand-washing and, crucially, avoiding close contact with others. The result has been an almost complete shutdown of places where people normally gather - schools, places of worship, restaurants and sports venues.

The Tokyo Olympics became the latest major sports event to fall casualty to COVID-19, with the International Olympic Committee postponing the Games until 2021. Canada had already said it would not participate, becoming the first country to take that position.