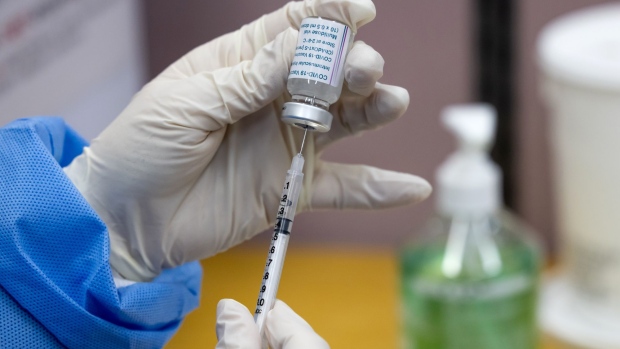 A nurse fills a syringe with a dose of the AstraZeneca Plc Covid-19 vaccine at a public health center in Incheon, South Korea, on Friday, Feb. 26, 2021. South Korea began utilizing AstraZeneca vaccines to inoculate patients and workers at nursing homes and related facilities who are younger than 65. Photographer: SeongJoon Cho/Bloomberg , Bloomberg

TORONTO -- A new influenza vaccine facility will be built in Toronto to help bolster Canada's biomanufacturing capacity, the federal government said as it announced the new project Wednesday.

Innovation Minister Francois-Philippe Champagne said the federal government will spend $415 million in partnership with Sanofi Pasteur Ltd. and the Ontario government to build the new facility by 2027.

Champagne said the pandemic has taught all countries that they need to have domestic vaccine manufacturing capacity.

"When it comes to the next pandemic flu we should be self sufficient," he said. "If there's one lesson learned from the current COVID pandemic it is that we need to have a strong Canadian biomanufacturing sector."

The federal government said the new facility will have the ability to produce enough vaccine doses to support the entire Canadian population within about six months of the World Health Organization identifying a pandemic flu strain.

Champagne said that Sanofi chose Canada as the home of its new production and distribution centre after a global search.

Ontario Premier Doug Ford said his government will contribute $55 million to the project and Sanofi will provide more than $455 million.

The project will create 1,225 jobs and Sanofi will also invest at least $79 million a year to fund Canadian research and development.

The new facility's work will include drug product formulation, fill-and-finish and inspection of flu vaccines.

Canada's ability manufacture its own vaccines and personal protective equipment has been a hot-button issue throughout the pandemic.

Ford, who has been critical of former U.S. president Donald Trump's bid to block shipments of personal protective gear to Canada last year, lauded the announcement on Wednesday.

"We are now never going to have to rely on any country, any leader, we will be self-sufficient," he said.