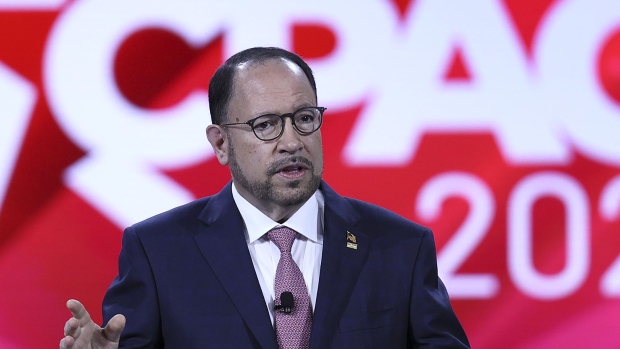 An employee stacks boxes of Goya Foods Inc. seasoning products on top of pallets at the company's distribution warehouse in Jersey City, New Jersey, U.S., on Monday, April 23, 2018. The U.S. Census Bureau is scheduled to release wholesale inventories figures on May 9. , Bloomberg

(Bloomberg) -- The relative calm that has prevailed of late in America’s pantry-based culture wars is facing a new challenge from a familiar provocateur. Robert Unanue, the controversial chief executive officer of Goya Foods Inc., is back moonlighting as a political pundit.

“The American people aren’t the major cities where there’s all these handouts and all these riots and destruction,” he said.

For fans already well versed in Unanue’s political beliefs, none of the views he expressed on Whitaker’s show would come off as particularly jarring. But his presence may have come as a bit of a surprise. As Whitaker noted during the show, it wasn’t that long ago that Unanue himself had been nearly “canceled.”

Unanue’s brush with political controversy started in July of 2020 during a visit to the White House where he announced that Goya would be making donations to US food banks as part of the Hispanic Prosperity Initiative and said the country was “truly blessed” to have President Trump as a leader.

Afterward, several prominent progressive politicians and cultural influencers, including Alexandria Ocasio-Cortez, Julián Castro and Lin-Manuel Miranda, took shots on social media at Unanue’s support for a president whose policies and rhetoric, they suggested, were hostile to Latinos—a key segment of Goya’s consumer base. Soon, calls for a boycott of Goya products were trending on Twitter. In response, conservatives launched a counter “buycott” to support the brand. Trump posed with Goya products, smiling and flashing two thumbs up.

In early 2021, not long after the Jan. 6 riots, during an interview with Maria Bartiromo on Fox Business, Unanue questioned the legitimacy of the presidential election, which he called “unverified.”  The comments didn’t go over well with some of Unanue’s colleagues in Goya management and several days later, the New York Post reported that Goya’s board had voted to censure Unanue. Moving forward, he would be required to obtain the board’s permission before he went out and made any more political statements in media appearances. Unanue, for his part, seemed ready and willing to cool things down.

“Independently, I’ve made the decision to lower the temperature and walk away from speaking about politics and religion,” he told the Post.

Across the Internet, various individuals on the right lamented “cancel culture” coming for Unanue. But, despite what Unanue told the Post, he has never seemed particularly committed to avoiding the political spotlight.

These days, he is anything but muzzled.

In recent months, he has been popping up regularly on the conservative cable news network Newsmax. During an appearance in April, he criticized Biden’s foreign policy for showing “incredible weakness.” In June, he blamed the Biden administration for rising inflation. In September, he said that the Democrats had “declared a war” on the working class. “We got to put away this gender and race garbage and get back to work,” he said.

Recently, he appeared on Fox News’ Tucker Carlson Tonight, where he praised the right-wing Italian politician Giorgia Meloni and warned that elites were trying to “enslave us, control us, for their own greed and power” by taking away people’s purpose in life.

“I don’t think I’ve ever heard a CEO of a big company talk that way,” Carlson said at the end of the interview. The Fox News host wrapped up the segment by saying he was going to start eating Goya that night.

In early October, Unanue stood on stage in Miami and introduced President Trump who was delivering the keynote speech at the Hispanic Leadership Conference. Before turning over the spotlight, Unanue noted that Trump “will bring our country closer to God.”

To date, the Goya board hasn’t announced any formal change in its policy regarding Unanue’s punditry. A spokesperson for Goya didn’t respond to a request for comment, nor did Robert’s relative Andy Unanue, a board member and former chief operating officer of Goya. Several other board members also didn’t respond to requests for comment sent via LinkedIn.

Unanue’s grandfather, who was born in Spain and moved to New York City to attend business school, founded Goya in the 1930s. The headquarters of the privately held company are in Jersey City, New Jersey. In 2014, Forbes put the family’s wealth at $1.1 billion.

The company’s apparent willingness to let Unanue freely speak his mind in public may be supported by the dynamics of the marketplace. Recently, there have been a number of signs that Republicans are gaining ground on the Democrats among Latino voters. And sales data suggest that Unanue’s conservative views have done little to dent Goya’s overall popularity with consumers.

According to figures from Numerator, a consumer insights and data company, Goya’s dollar share of the US canned foods category is 1.7%, unchanged from two years ago. In August, the journal Marketing Science, published a paper from a trio of researchers who found that the 2020 boycotts—rather than hurting the company—had actually resulted in a temporary 22% increase in Goya’s sales nationwide.

“Everyone used to say that politics is the third rail: Don’t upset anybody in the market,” said Allen Adamson, the co-founder of Metaforce, a marketing strategy firm. “But for Goya it may actually be better to upset half the market while getting the other half excited [rather] than to be so boring that nobody cares. What matters in marketing and branding are people who feel passionate enough to actually go do something versus clicking a like on social media.”