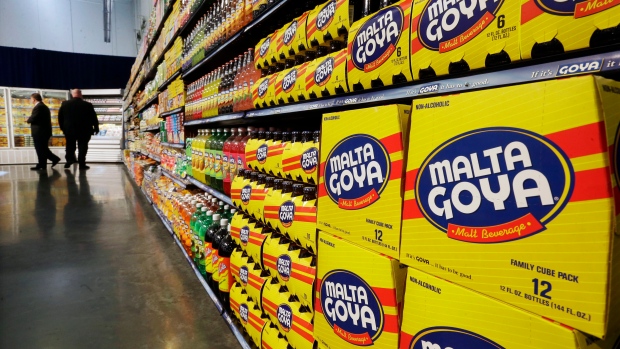 In this April 29, 2015 file photo, people walk past displays of Goya Foods products at the new corporate headquarters in Jersey City, N.J. Goya Foods is facing a a swift backlash after its CEO Robert Unanue praised President Donald Trump at White House event on Thursday, July 9, 2020. Almost immediately, Twitter exploded, with users both famous and not reminding Unanue of Trump's history of derogatory comments and harsh policies toward Hispanics, most notably, the administration's policy of separating immigrant families at the U.S.-Mexico border. AP Photo/Mel Evans

It was an image evocative of an earlier era, when Donald Trump was pitchman, not president. On Wednesday, he posted to his personal Instagram account a grinning two-thumbs-up image of himself sitting at the Resolute Desk in the Oval Office behind kidney beans, coconut milk and chocolate wafers.

The taunting post was the latest volley in a battle raging over Goya Foods Inc., a company best-known a week ago for wholesome and cheap quarantine staples and now being shunned and touted in the endless fight over Trump himself.

The controversy erupted last Thursday when Goya’s Chief Executive Officer Robert Unanue said at a White House ceremony for the President’s Hispanic Prosperity Initiative that the country was “truly blessed” to have such a leader.

Liberal Latinos, furious at Trump’s anti-immigrant comments and policies, took to social media with the hashtag #Goyaway, urging a boycott.

“Hamilton” star Lin-Manuel Miranda tweeted about a beloved Latino sauce: “We learned to bake bread in this pandemic, we can learn to make our own adobo con pimienta. Bye.” Others showed themselves chucking Goya products in the trash.

Trump supporters were quick to counter, urging their followers to “buy Goya.” Daughter Ivanka Trump posted a photo of herself holding a can of black beans with the company’s slogan, “If it’s Goya, it has to be good,” in English and Spanish.

The president sent one of his own, stating Goya is “doing GREAT” and “people are buying like crazy!”

The U.S. Office of Government Ethics may investigate Ivanka for what many consider a breach, but ultimately it’ll be up to the president to apply any penalty.

“It’s not entirely clear what the consequences would be because all of it depends on enforcement,” Delaney Marsco, an official with the Campaign Legal Center, a non-partisan ethics watchdog group said by telephone. “And this administration has not been particularly quick to enforce consequences.”

The White House dismissed the fracas. “Only the media and the cancel culture movement would criticize Ivanka for showing her personal support for a company that has been unfairly mocked, boycotted and ridiculed for supporting this administration -- one that has consistently fought for and delivered for the Hispanic community,” spokeswoman Carolina Hurley said.

Unanue went on “Fox and Friends” to say that he had joined Michelle and Barack Obama at the White House during their time there and had no regrets over what he did or said about Trump.

At his White House appearance last week, Unanue compared Trump to his own grandfather, saying they were both builders. There is a noteworthy similarity between the two families, the offspring of ambitious immigrants who produced prosperity and fierce internal feuds.

Goya describes itself as America’s biggest Hispanic-owned food company and it’s one of the few in the industry to remain family-owned, having flourished by targeting the country’s 60.6 million-strong Hispanic population.

The history and story of Goya is about “achieving the American dream,” asserts the company’s website. Unanue’s grandparents, Don Prudencio and Carolina, founded the business in 1936 after immigrating from Spain by way of Puerto Rico.

Starting with a single Manhattan storefront selling olives and sardines to local Hispanic families, the business grew into a dried-foods juggernaut as the country’s Hispanic population exploded and it figured out how to deliver directly to food stores big and small.

Goya generated just over US$1 billion in operating revenue in 2018, according to private company database, Orbis. The New York Post reported last year that private equity firm Carlyle Group Inc. explored a bid for the business at around US$3 billion to US$4 billion but negotiations fell apart after they couldn’t agree with the family on price.

The business is split among three branches of the Unanue family and valued at US$1.7 billion according to Bloomberg calculations. A Goya spokesperson couldn’t be reached for comment.

In an industry rife with consolidation, Goya is notable for remaining independent although family harmony has often proved elusive.

In 2004, current CEO Robert and his cousin Francisco brought a court case against their uncle Joseph, then chairman, and cousin Andrew, seeking to enforce their removal from the company due to alleged autocratic and unprofessional behavior.

Joseph and Andrew were ultimately ousted from the business and Andrew now runs a private equity firm focused on Hispanic or family-owned consumer businesses.

Trump’s promotion of the brand may harm Goya’s business in the near term, according to Neeru Paharia, a professor at Georgetown University’s McDonough School of Business.

“Their customers are probably more likely to be in the demographic that might be offended by some of Trump’s comments,” she said. “It’s a good way to kind of vote with your dollar.”

In 2012 Goya partnered with Michelle Obama and the U.S. Department of Agriculture to launch a healthy-eating initiative. Its website boasts of being lauded by President Obama for its commitment to the Hispanic community.