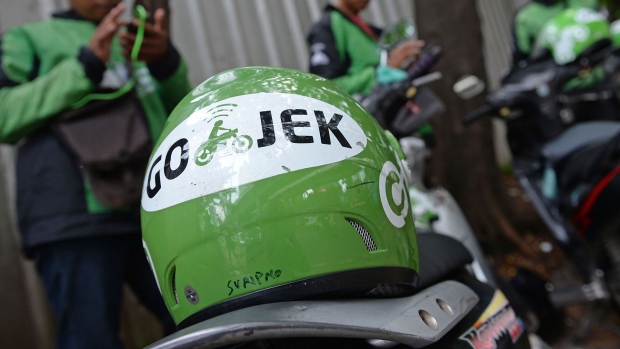 (Bloomberg) -- Grab Holdings Inc. and Gojek have made substantial progress in working out a deal to combine their businesses in what would be the biggest internet merger in Southeast Asia, according to people with knowledge of the talks.

The region’s two most valuable startups have narrowed their differences of opinion, though some parts of the agreement still need to be negotiated, said the people, asking not to be named because the talks are private. The final details are being worked out among the most senior leaders of each company with the participation of SoftBank Group Corp.’s Masayoshi Son, a major Grab investor, one of the people said.

Under one structure with substantial support, Grab co-founder Anthony Tan would become the chief executive officer of the combined entity, while Gojek executives would run the new combined business in Indonesia under the Gojek brand, the people said. The two brands may be run separately for an extended period of time, one of the people said. The combination is ultimately aimed at becoming a publicly listed company.

Representatives of Grab, Gojek and SoftBank declined to comment. The talks are still fluid and may not result in a transaction, the people said. The deal would need regulatory approval and governments may have antitrust concerns about the unification of the region’s two leading ride-hailing companies.

Grab and Gojek have been locked in a fierce, expensive battle for dominance in that business along with food delivery and mobile payments over the last several years. Investors have been pushing for them to combine forces across Southeast Asia in order to reduce cash burn and create one of the most powerful internet companies in the region. Grab, which is present in eight countries, was last valued at more than $14 billion, while Gojek, valued at $10 billion, has presence in Indonesia, Singapore, the Philippines, Thailand and Vietnam.

SoftBank has been pushing for a deal since Son visited Indonesia in January, but he’s grown increasingly frustrated with the lack of progress. The old rivalry and personality clashes between the two companies’ leaders have led to deadlocked negotiations in the past, according to one of the people familiar with the talks.

Sea Ltd.’s rise as a formidable force in e-commerce and digital payments has injected fresh impetus to the Grab-Gojek conversation, the people said. The Singapore-based company’s e-wallet, ShopeePay, has been gaining market share at a rapid clip, aided by the growing popularity of Sea’s e-commerce platform Shopee. That, in turn, is challenging market leaders GoPay and Grab-backed Ovo in Indonesia.

Sea’s surprise journey from a scrappy startup to Southeast Asia’s most valuable company in the past 10 years has been the “biggest inspiration” for local internet companies lately, said Rohit Sipahimalani, chief investment strategist at Temasek Holdings Pte. Sea went public in 2017 after raising more than $720 million from investors and now has a market value approaching $88 billion.

“People are now seeing that the public markets are a viable alternative for internet companies in Southeast Asia,” said Sipahimalani, whose firm is an investor in Gojek. “But they also recognize that they need to get to a certain scale, which is why the IPO route is becoming more attractive. I think that’s leading to some dialogue around combinations and consolidations in the region.”

He declined to comment on the Grab-Gojek deal, adding that Singapore’s state-owned investment firm isn’t taking part in the negotiations.