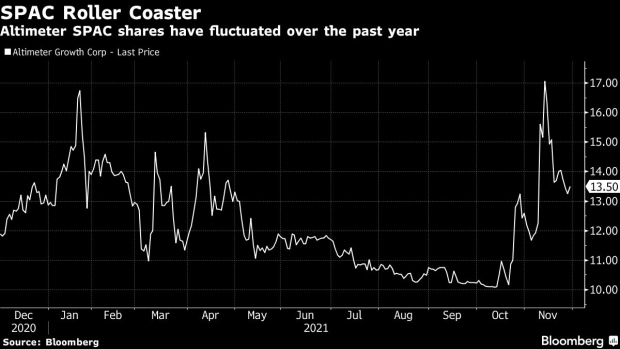 (Bloomberg) -- Investors voted to approve the merger of ride-hailing provider Grab Holdings Inc. and Altimeter Growth Corp., completing one of the largest special purpose acquisition company deals ever after a year of tumult for SPACs and the transaction itself.

The proposal passed at a special shareholder meeting Tuesday, setting the stage for Grab to become a publicly traded company, according to a statement. The combined entity will start trading on the Nasdaq on Dec. 2 under the ticker GRAB.

Singapore-based Grab, led by Chief Executive Officer Anthony Tan, had long been viewed as a marquee company in Southeast Asia and a promising candidate to go public. Tan and co-founder Hooi Ling Tan, backed by SoftBank Group Corp., fought off aggressive competition to become one of the largest ride-hailing and delivery companies in the region -- and the most valuable startup.

But the road to public markets has been rocky. After Grab unveiled plans to merge with Altimeter Capital Management’s SPAC in a $40 billion deal, they had to postpone the closing to work on an audit of the past three years’ accounts. Meanwhile, regulatory scrutiny of SPACs and a resurgence of fears about Covid-19 infections threatened to derail the agreement.

In September, Grab cut its revenue projections for 2021 as Southeast Asia battled with the delta variant. In November, the company said its net loss widened to $988 million for the third quarter, while revenue declined 9% to $157 million. Later that month, Grab’s app suffered extensive disruptions.