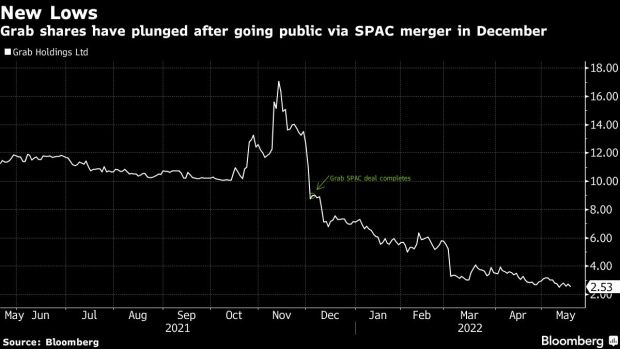 GrabFood delivery riders in Singapore, on Wednesday, May 18, 2022. Grab Holdings Ltd., is expected to report results on May 19. , Bloomberg

(Bloomberg) -- Grab Holdings Ltd. said revenue rose 6% in the first quarter after the ride-hailing and delivery company won back consumers as the pandemic recedes in Southeast Asia.

Revenue increased to $228 million from $216 million a year earlier, the Singapore-based company said in a statement on Thursday. That was more than the $139.2 million analysts were expecting, according to data compiled by Bloomberg. Grab’s net loss narrowed to $435 million, as the company fights to gain profitability following years of heavy spending in pursuit of market share.

Grab has struggled since becoming a publicly listed company in the U.S. through a merger with a blank-check company in December. Mounting losses, coupled with a broad tech selloff, have weighed on its shares, which have lost more than 70% since the startup went public.

The company said it expects full-year revenue to reach $1.2 billion to $1.3 billion.