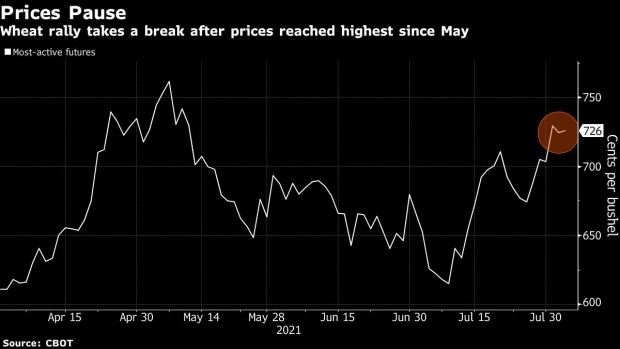 Wheat kernels during the summer harvest on a farm in Tersky village, near Stavropol, Russia, on Thursday, July 8, 2021. Farmers from Kansas to Kyiv are gearing up to collect abundant wheat crops in coming weeks, helping ease a global grain shortfall that’s fueled a surge in prices. , Bloomberg

The agriculture ministry in France downgraded its wheat crop outlook on Wednesday. Its grain quality is also a concern due to the continued moisture at harvest, with July precipitation about 50% above normal. That adds to lower expectations for wheat output in Russia. Drought has slashed spring wheat prospects in North America, and torrential rain also damaged quality in China, while use of wheat in feed has surged.

Still, rising crop prices are softening demand in some key buyers. Top wheat importer Egypt booked a lone grain cargo at a tender on Monday, its smallest volume in nearly a year. Turkey canceled a tender seeking 515,000 tons of feed barley, and Pakistan bought less than half the wheat sought in a tender late last week.

“Some consumers are balking at higher prices,” said Tobin Gorey, strategist with Commonwealth Bank of Australia, referring to wheat. “And that balk has a few traders worried that perhaps the gains have been too much, too soon. We’re a little skeptical of that – the market is cutting wheat crop estimates.”

Wheat and soybean futures in Chicago each rose about 0.4%, and corn was steady. On the Euronext exchange, milling wheat was little changed after touching a three-month high on Tuesday.