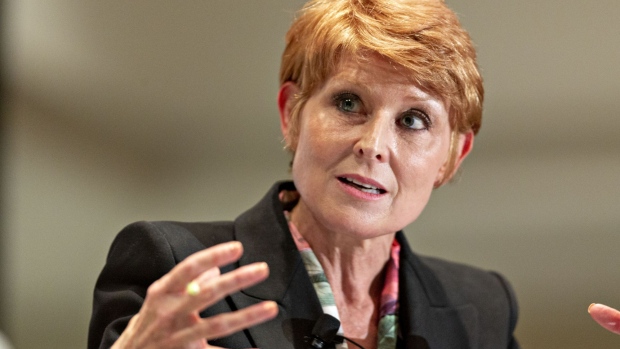 Diane Swonk, chief economist of Grant Thornton LLP, speaks with Jennifer Scanlon, president and chief executive officer of USG Corp., not pictured, during a Women's Leadership series event at the Chicago Executives' Club in Chicago, Illinois, U.S., on Tuesday, June 12, 2018. Scanlon discussed why it's important for the next generation of women to "Do the Math" and use STEM as a way to expand their career choices in a discussion titled, 'Expanding the 30 percent: Women in Manufacturing.' Photographer: Daniel Acker/Bloomberg , Bloomberg

(Bloomberg) -- Grant Thornton’s Diane Swonk said she doesn’t expect inflation in the U.S. to slow down significantly until 2023, showing the risks the Federal Reserve faces if it moves too slowly in removing the pandemic-era stimulus from the economy.

“We’re not likely to see inflation really cool down to a level where everyone feels it’s insignificant until we get into 2023,” Swonk, chief economist at Grant Thornton, said in a Thursday interview on Bloomberg TV. “The risk is that they’re going to have to hedge against it not getting entrenched, which could mean an even sooner and more aggressive move by the Fed. But that also has a lot of risk with it as well.”

An increasing number of Wall Street voices -- including Goldman Sachs Group Inc. President John Waldron and JPMorgan Chase & Co. chief Jamie Dimon -- have also pointed to the heightened measures of inflation as of late. The concerns echo commentary by Federal Reserve Bank of St. Louis President James Bullard who believes “too much inflation” is the current issue at hand.

The tapering of the Fed’s bond buyer program would be the first stage of monetary policy tightening, with the interest rate swaps market not pricing in a first rate hike until November 2022.

“This is not an easy call within the Fed either but knowing where the Fed stands and how they hedge risk, it’s going to be very hard if we’re still seeing inflation above a three percent rate well into 2022 to not do something that’s a little more aggressive,” said Swonk