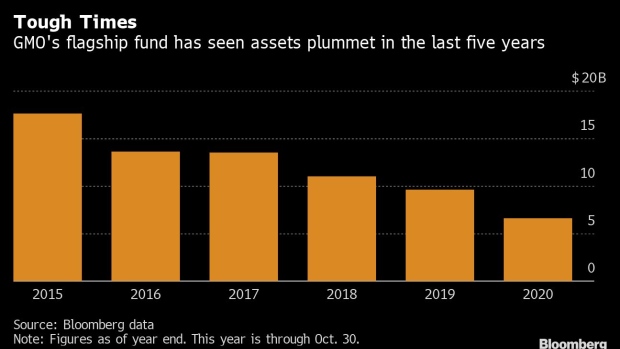 (Bloomberg) -- Jeremy Grantham’s GMO is paying the price for yet another contrarian call by its co-founder.

Convinced that U.S. equities were unjustifiably expensive given the economic damage from the pandemic, the renowned value investing money manager and his asset allocation chief, Ben Inker, told investors in June that it was time to sell stocks.

The Boston-based firm had recently cut the net equity exposure of its main fund by almost half to 25% -- and the bull market roared further ahead, leaving GMO investors behind.

GMO’s flagship Benchmark-Free Allocation Fund, which seeks returns of five percentage points above the rate of inflation, has badly underperformed risk assets so far this year. It trails the S&P 500 by 14 percentage points. While its primary equity holdings are in emerging markets, it also lags behind MSCI’s main developing-market gauge.

Clients have pulled $2.2 billion from the fund in the last 10 months. Assets have dropped by more than half since 2015 to $6.6 billion as of the end of October.

“I can see how clients lose patience with them,” said Ben Carlson, director of institutional asset management at Ritholtz Wealth Management. “They get defensive way before anybody else.”

Inker said he understands why enthusiasm for value investing has dimmed. “The cruel logic of being a value manager is that at the very time when your opportunities are at their best, your credibility with clients is at its lowest ebb,” he said in an email. Over the next five to 10 years, most value stocks seem priced to have a “decent real return,” he said.

“GMO has experienced periods like the present before,” he said, adding that the firm is confident in its current positioning.

Grantham, 82, is famous for being ahead of his peers. He exited Japan in 1987, called the tech bubble and saw signs of the housing crisis in 2006.

Even as clients have left the firm -- total assets have declined to $60 billion -- GMO has expanded its fixed-income lineup, attracted investors with its factor-based strategy and started a climate change fund. Grantham’s philanthropic efforts focus on the issue.

Yet when value manager and GMO client Ted Aronson recently recommended that a non-profit make an allocation to the firm, its executives declined, he said.

Last week, the Sonoma County Employees’ Retirement Association affirmed a decision to pull $140 million from one of the firm’s global asset allocation strategies, ending a 15-year relationship with GMO. The strategy hadn’t beaten its benchmark for more than six years, fund documents reviewed by Bloomberg show.

The Benchmark-Free fund and some of the firm’s other asset allocation strategies have “underperformed for a long time,” said Bobby Blue, a Morningstar Inc. analyst. “It’s tough to stomach.”