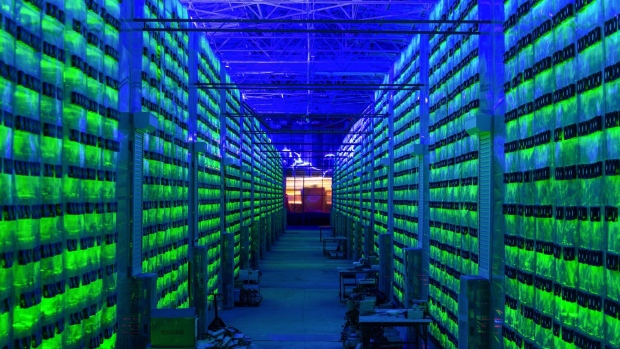 (Bloomberg) -- An activist family office that owns shares in Grayscale Bitcoin Trust is demanding a tender offer to boost prices that have fallen about 8% below the value of the digital assets it holds.

As of March 31, the share price represented a $3.1 billion loss to shareholders compared with the Bitcoin it holds, according to a letter that Marlton LLC sent Tuesday to the board of Grayscale Investments LLC, the trust’s parent. Marlton declined to say how many trust shares it holds.

Digital Currency Group Inc., which controls Grayscale Investments, authorized the purchase of as much as $250 million of trust shares last month in an effort to buoy prices. Grayscale Investments said on Monday that it intends to reapply to the Securities and Exchange Commission to convert the trust into a Bitcoin exchange-traded fund, a process it abandoned in 2017. Neither option is enough, Marlton said.

“We are frustrated that the board might allow management to squander the company’s leading market share to the detriment of GBTC stockholders, whilst simultaneously rewarding yourselves handsomely with a profligate, market-leading, 2% management fee,” James Elbaor, who runs the Marlton office, said in the letter. “Marlton and other stockholders will not tolerate such clear destruction of stockholder value.”

Representatives for Grayscale Investments didn’t immediately respond to a request for comment.

For years, the Grayscale Bitcoin Trust was one of very few ways to get exposure to Bitcoin without buying the digital asset directly. That led to a steep premium on its shares in the secondary market where they trade after a six-month lockup period. Yet those shares are never destroyed as in a typical ETF, leading to a record supply of nearly 700 million. Even as Bitcoin skyrocketed about 772% in the past year, the trust shares have swung from a 40% premium in December to a discount today.

New entrants to the market are another factor in the Grayscale trust’s woes, Elbaor said in the letter.

“Aggressive competition from NYDIG, Galaxy Digital and BlockFi, among others, threatens GBTC’s dominant U.S. market position, as the cryptocurrency industry awaits the SEC’s decision to approve cryptocurrency ETFs,” the letter said. “A clear capital allocation plan via a tender offer in GBTC will distinguish you and GBTC as the sole digital currency asset manager creating stockholder value.”