Regulators' pace on the crypto industry is quite reasonable: Grayscale Investments' Craig Salm

Grayscale Investments LLC and the New York Stock Exchange filed to convert the world’s biggest Bitcoin fund into an ETF, appealing to regulators for approval just as its wildly popular vehicle is beset with competition.

The application to flip the US$40 billion Grayscale Bitcoin Trust (ticker GBTC) landed on the same day that the ProShares Bitcoin Strategy ETF (BITO) debuted, becoming the first exchange-traded fund in the U.S. investing in futures on the digital asset. While the Securities and Exchange Commission has allowed the derivatives-based product to launch, it has yet to permit the kind of structure used by Grayscale, which directly holds the largest cryptocurrency.

Grayscale’s filing starts a window for the SEC to reject or delay the GBTC conversion application. Michael Sonnenshein, the asset manager’s chief executive officer, has stated the firm is “100 per cent committed” to turning GBTC into an ETF as soon as U.S. regulators allow. 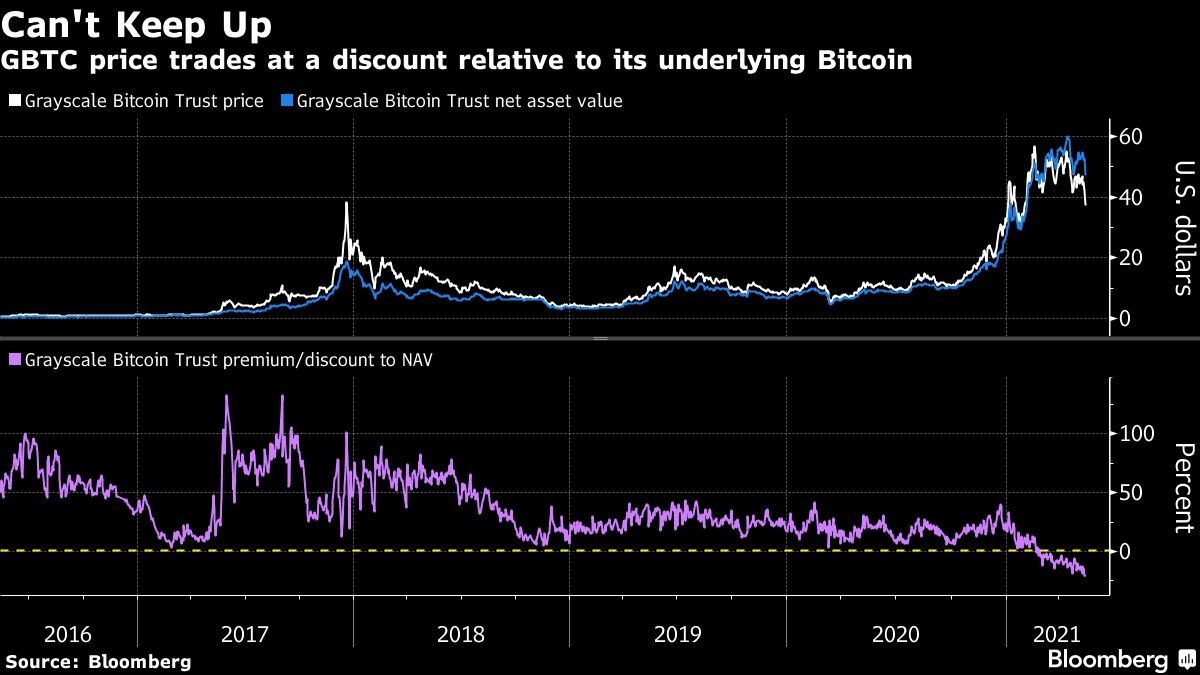 Grayscale hired a global ETF head in August to further those efforts. With the launch of BITO, physical Bitcoin ETF approval is likely only a matter of time, Sonnenshein said. The ProShares ETF opened Tuesday with an early gain, giving a lift to Bitcoin as it approached its April record.

“We are of the firm belief that because the futures and the spot pricing for Bitcoin are inextricably tied, that we have the willingness to allow or clear the way for a Bitcoin futures ETF in the market, and also clear the way for a spot ETF,” Sonnenshein said in an interview. GBTC currently holds roughly 3.4 per cent of the world’s supply of Bitcoin, according to Grayscale.

The company has long been committed to converting the flagship fund, Dave LaValle, Grayscale’s global head of ETFs, said on Bloomberg’s “QuickTake Stock” broadcast on Tuesday. When asked about why the company hasn’t opened GBTC back up to new investors, he said investors are able to trade on the secondary market.

The conversion would likely solve a persistent problem for Grayscale: the trust’s discount to net asset value. The product’s price has traded below its underlying Bitcoin holdings for a prolonged period because shares in the vehicle can’t be destroyed in the same way as they can in an ETF. But it could also be seen as a way to sidestep obsolescence, with the advent of Bitcoin ETFs threatening to draw assets away from a product that investors have tolerated due to the lack of an alternative.

GBTC trading at a discount is no secret and it’s an opportunity that investors can take advantage of, said LaValle. It’s also a reason the company has remained committed to converting the fund into an ETF -- such a structure could help close up the discrepancy.

Specialized traders known as authorized participants are able to create and redeem shares of an ETF to keep its price in line with its net asset value, but that process doesn’t exist for trusts like GBTC. The number of outstanding shares in the fund has ballooned over the past 12 months as Bitcoin soared.

Barry Silbert’s Digital Currency Group Inc. -- Grayscale’s parent company -- has scooped up hundreds of millions of dollars worth of GBTC in an attempt to reverse the dynamic.

“The best plan for us is to continue to lobby on behalf of our investors,” said LaValle on the streaming program. “Our investors have an overwhelming desire for a spot-Bitcoin ETF, so we remain committed to that conversion.”