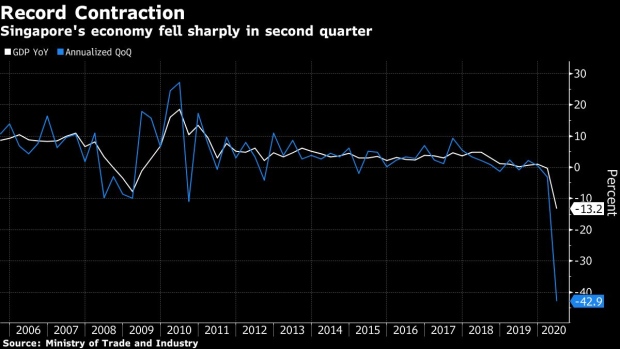 (Bloomberg) -- With the coronavirus pandemic threatening the global openness and integration that have allowed Singapore to prosper, President Halimah Yacob said there’s “great urgency” to transform the city-state’s economy.

“Much of our economy thrives because we have made ourselves a vibrant hub for the region and an attractive place for trade, investments, talent and ideas,” Halimah said Monday, addressing the first session of parliament since July’s general election. “We cannot take our hub status for granted, or assume that its scope and role will remain the same.”

She said the country will resume air travel safely and help its companies develop links to new markets. Meanwhile, efforts to bolster resilience in critical areas such as food, health care and supply chain management can become new sources of growth, while the Southeast Asian nation will also make a major push for sustainable growth including for green financing across the region, she said.

Singapore’s economy entered a technical recession in the second quarter, shrinking a record 42.9% from the previous three months on an annualized basis. Additional support measures of S$8 billion ($5.8 billion) were announced last week to help businesses and workers, adding to some S$93 billion in earlier pledges of government aid for the economy, among the highest levels in the region.

The city-state has more than 56,000 confirmed cases of infection, with over 90% of the total coming from migrant laborers living in tightly-spaced dormitories. Partial lockdown measures imposed in April kept infections at bay among the general public, while Singapore has bolstered its testing and contact-tracing capacity as well as built dedicated community care centers that have helped prevent its health care system from becoming overloaded.

Halimah said the island nation needs to strengthen its social-safety net “to give Singaporeans more assurance coping with life’s uncertainties” and added the government will do “much more” in this term to see its people through the crisis and beyond. Singapore’s jobless rate hit its highest level in the second quarter since the global financial crisis more than a decade ago.

The president also said in her speech that the government will address the sense of competition for jobs from work pass holders, an issue that is “potentially divisive” and has become a major source of anxiety, especially among mid-career Singaporeans. These concerns “not only touch on matters of livelihood, but also on our sense of identity and belonging,” she said.

Halimah said that while the government will work with employers to further bolster workforce capabilities and ensure firms treat Singaporeans fairly when they recruit and retrench workers, the country must also not turn inwards and should continue to welcome those who can contribute to the nation.

The president’s comments follow elections last month where popular support for the ruling People’s Action Party fell to near a record low. With the opposition taking a greater role in parliament, Halimah said that, “besides raising questions and criticisms,” they should now propose policy alternatives to be scrutinized and debated.

“When the situation demands, both the government and opposition should set aside differences and work together to secure the safety and future of our nation,” she said.