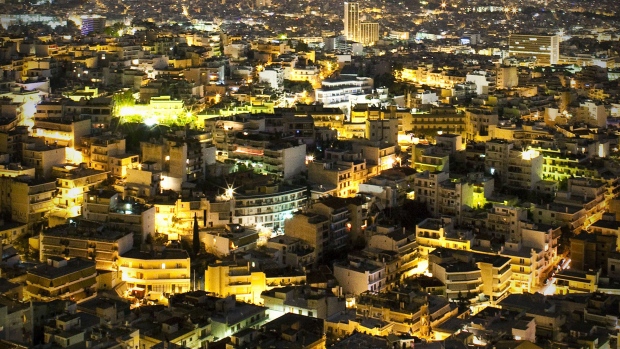 Properties are illuminated at night in this aerial view of Athens, Greece, on Tuesday, Dec. 6, 2011. Greece's budget deficit will also narrow thanks to measures already approved by lawmakers in October, including cuts in public sector wages and pensions, a plan to put 30,000 public sector workers in a labor reserve on reduced pay and a property tax levied on Greeks' electricity bills. Photographer: Bloomberg/Bloomberg , Photographer: Bloomberg/Bloomberg

Greece’s largest electricity producer Public Power Corp fell as much as 13.5% at the opening in Athens, the most since March 2020, after it announced a capital increase of around 750 million euros ($880 million) and the state said it would look to reduce its stake from a combined 51% to a blocking minority.

The company will use the funds to support an updated strategic plan which now sees stepped-up investments of 8.4 billion euros through 2026. The investment program will focus on renewables, but PPC will also look to expand in adjacent markets in southeastern Europe.

The capital hike may be completed by early November and PPC said it has received “substantial” indications of interest and support from investors. The government said its decision to hold only a blocking minority will allow for more private participation in the company.

The move comes after PPC announced a 2.12 billion-euro deal with Australia’s Macquarie Infrastructure Corp. and Real Assets Group to buy a 49% stake in its Hedno unit.