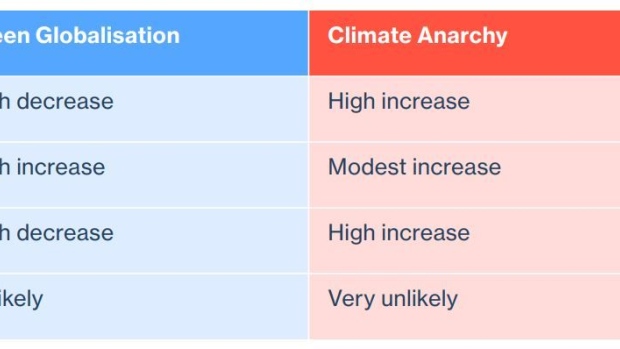 An ash plume rises from the Kilauea volcano on Hawaii's Big Island on May 15. , Getty Images

Climate change is going to reshape the world, whether we succeed at tackling it or not. That’s no longer a statement coming only from scientists, but from the insurance industry too.

In a report titled Shifting Powers, academics at the University of Cambridge and experts at the insurance marketplace Lloyd’s of London try and imagine what that reshaped world is likely to look like. Rather than imagine which parts of the world would flood more frequently and which would catch fire more often, they imagine the impact on geopolitics.

The conclusion? The world could go down one of three paths:

This type of scenario analysis has become the go-to tool for large companies and governments trying to deal with a highly uncertain world. The conclusions are imagined futures that result from making some fundamental assumptions, interviewing experts from many different fields and using computer models as an aid.

For example, a core assumption of the new analysis is that no technology breakthroughs occur in the decade. Instead, existing technologies develop at the current rates. Thus solar power keeps getting cheaper, and nuclear fusion doesn’t become a reality.

Though these analyses aren’t cheap, their use has grown rapidly. “The stakes are much higher,” said one of the report’s authors, Matteo Ilardo, risk researcher at the Centre of Risk Studies at Cambridge University. “Governments and corporate boards are very interested in trying to diminish risks, but also capture opportunities.”

The results of the Shifting Powers study are quite close to another study published in November 2019, led by Morgan Bazilian at the Payne Institute in Colorado. That study presented four scenarios:

These scenarios are, of course, very rough approximations of what the world could look like. Right now, Illardo says that Green Cold War is where the world seems to be heading, but there is still time before the world is committed to that path. So if scientists’ warnings about the physical risks of climate change don’t move the public, perhaps the conservative insurer’s geopolitical outlook might finally make people take global heating more seriously.