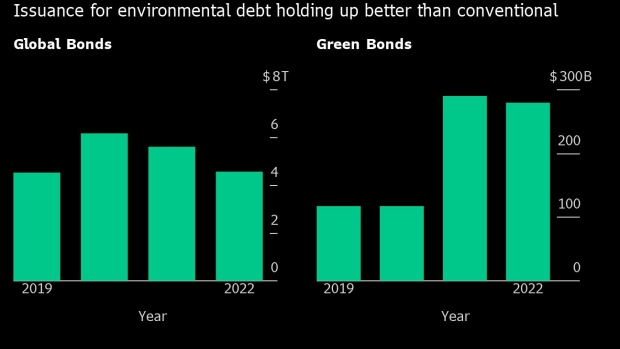 Solar panels which form part of the floating solar farm, operated by EDPR, during preparations for operational use in Alqueva, Portugal, on Tuesday, June 7, 2022. EDPR, the renewables arm of Portugal’s main utility EDP, will pay for the electricity generated at a floating solar project it bid to build in an auction, without any compensation in return. Photographer: Goncalo Fonseca/Bloomberg , Bloomberg

(Bloomberg) -- Green bond issuance is holding up better than plain vanilla debt this year, down just 3% compared with a 19% drop for standard bonds, according to Bloomberg data.

The resilience is notable considering that green bonds underperformed traditional issues in each of the first six months, a trend that only reversed in July.

“Dedicated ESG deals have tended to have a higher level of over-subscription than conventional offerings,” said Susan Barron, global head of sustainable capital markets at Barclays Plc, one of the top 10 managers for such issuance since the start of 2019.

Many buyers now have internal guidelines for sustainable investing that may be keeping demand high.

Eastspring Investments plans to add more sustainable securities as a proportion of its portfolios “as the investible universe continues its healthy expansion,” said Portfolio Manager Rong Ren Goh, adding that issuers from Japan, Korea and to some extent China were appealing.

“Even as the risk environment deteriorated over the last few months amid tightening financial conditions, the credit spreads of these issues have not widened significantly, further augmenting their status as defensive assets,” the investor said.

Still, borrowers in the US and Europe have postponed both conventional and ESG deals this year in response to rising rates and worries about the economy and geopolitics. A Bloomberg index of green bonds was down 18.8% on a total return basis so far this year, outpacing the 13.2% drop in global bonds.