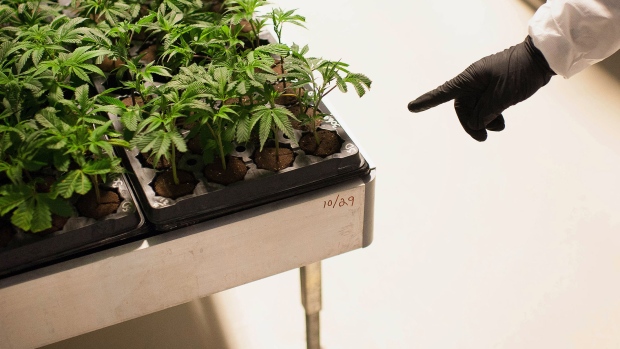 Cuttings from mother plants germinate in a grow room at the Tweed Inc. facility in Smith Falls, Ontario, Canada, on Nov. 11, 2015. Construction and marijuana companies are poised to benefit from the Liberal Party\'s decisive win in Canada\'s election, with leader Justin Trudeau vowing to fund infrastructure spending with deficits and legalize cannabis. , Photographer: James MacDonald/Bloomberg

(Bloomberg) -- Green Growth Brands Ltd., which owns one cannabis retail store in the U.S., has made a C$2.8 billion ($2.1 billion) unsolicited takeover offer for Aphria Inc., one of Canada’s largest pot producers. Short-seller Hindenburg Research, which has previously targeted Aphria, immediately called the bid “non-credible” and raised questions about connections between the two companies.

Green Growth Chief Executive Officer Peter Horvath responded by phone Friday to some of those doubts. His comments have been edited and condensed.

A: I read the short report. There’s not much to comment on because we have a real business. Honestly, if Aphria wanted to construct ... related-party transactions, why wouldn’t they just accept the offer? It is what it is, there’s nothing to debate. We’ve never hidden anything.

A: I met Vic once probably in September. Then in October, I saw him briefly when they were doing a legalization party. But I haven’t talked to him since.

Q: Your company’s second-largest shareholder is GA Opportunities Corp., a fund backed by Aphria and advised by Neufeld. Hindenburg calls it a “remarkable coincidence” that Aphria holds a major stake in its own hostile bidder through a fund advised by its own CEO. Did you know that?

A: We’ve held the line consistently that GA Opportunities was a fund that made an investment in us. We didn’t meet with the people that provided the money to them. We didn’t discuss it. It basically was brought to us, “Hey, we want to do a private placement with you,” and we accepted that. Normally we don’t ask who’s behind the money because normally the answer is very complicated.

Q: Hindenburg believes your bid to be an attempt to “generate the appearance of demand in the hopes of spurring credible offers” for Aphria. Is it?

A: No one at Aphria said, “Hey, please try to buy us.” I haven’t had that conversation. This pretty much happened independently. ... I know that the folks in Canada on Bay Street are all pretty tightly knit and everybody knows everybody, so it doesn’t completely surprise me. I don’t think they made that investment hoping that we would buy them. That just seems really far-fetched.

Q: Hindenburg says the Schottenstein family -- Green Growth’s biggest shareholder -- was involved with Aphria just one year ago. What do you say to that?

A: The Schottensteins, as far as I know, do not own any Aphria stock. Therefore, this is an appropriate transaction. I know that the board of Aphria and the management team of Aphria were not involved in developing this idea. In fact, what’s very visible is that they’ve rejected the idea. I feel everything’s fine, above board and transparent.

Q: Hindenburg also raised concerns about two individuals, Shawn Dym and Adam Arviv, who both had directorship roles at Green Growth as recently as October and both have close ties with Aphria. What about that?

A: When we did the reverse takeover [of Xanthic Biopharma], we got a new board. Shawn represents a family trust, I believe. They put some feed money into us back in March, and as a result, Shawn had a board seat. Adam Arviv had a board seat and the Schottensteins had two board seats. So then the reverse takeover took place and we adopted the board from Xanthic. We’re still in the process of re-forming the board now.

Q: When did you get involved with Green Growth and whose idea was it to approach Aphria?

A: I got involved in looking at the idea of forming the company in December of 2017. I presented a business plan and then we formed the company March 1. ... Like seven or eight days ago, Cannacord, our investment bankers, and Norton Rose, an M&A firm, brought to us the idea that this is a possibility to combine the companies.

Q: Did you question how your much smaller company would acquire a big one? How many retail locations does Green Growth have? A: Right now we own one. We have a second that we have an option to buy in Nevada. We were awarded seven licenses in Nevada. We also recently closed on a purchase of a Massachusetts license that gives us a grow facility, a processing facility and three stores. We also are underway working with six different developers, who represent most of the malls in the United States. We believe that by the end of this year we’re going to have 300 mall kiosks.

Q: After reading the short seller’s report, are you reconsidering your offer for Aphria or do you have any new concerns about the relationship between your two companies?

A: We don’t want to put ourselves in a position that jeopardizes our existing business, which has a lot of upside. If there’s anything that would appear inappropriate, we wouldn’t allow this to take place. We’re not into get-rich-quick schemes. We’re looking at real assets, real value, a seasoned management, and a true operating capabilities. At the end of the day, this is going to be up to shareholders to decide. There’s no opportunity to pull a fast one here.

To contact the editors responsible for this story: David Scanlan at dscanlan@bloomberg.net, Stephen Wicary, Carlos Caminada