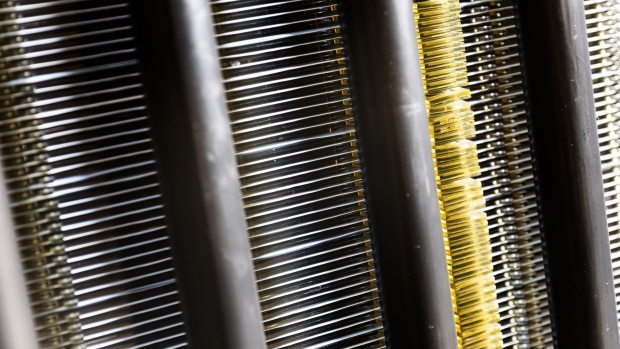 An electrolyzer stack at the Plug Power facility in Concord, Massachusetts, US, on Tuesday, July 5, 2022. The key to the green hydrogen economy is a little-known machine with a name out of 1950s sci-fi — the electrolyzer. Photographer: Adam Glanzman/Bloomberg , Bloomberg

(Bloomberg) -- Top manufacturers of equipment needed to produce green hydrogen said they expect China’s market to surge next year as the country continues to roll out projects to help meet decarbonization goals.

Sales of electrolyzers, devices that use electricity to split water into hydrogen and oxygen, will at least double next year in China, executives at producers including Longi Green Energy Technology Co. and Sungrow Power Supply Co. said Tuesday in a virtual panel at the BloombergNEF Shanghai Summit. About 600 to 700 megawatts of equipment will be sold in the country this year, with demand likely to rise to 1,500 to 2,000 megawatts in 2023, said Eric Lin, a board member at Cockerill Jingli Hydrogen.

Some of next year’s demand increase is coming from projects that were delayed this year because of Covid outbreaks or supply chain disruptions, Wang Yingge, a Longi vice president, said during the panel.

The surge is driving investments in factories to build the equipment. Longi’s hydrogen unit plans to increase its annual production capacity from 1.5 gigawatts now to more than 5 gigawatts around 2025, Wang said.

China currently dominates global electrolyzer sales, but Europe is expected to catch up by 2025 given government-backed investments and increasing urgency to reach climate targets, according to BloombergNEF. Global annual electrolyzer demand will grow from just more than 1,000 megawatts this year to around 85,000 in 2030, the research firm said.

China is the world’s leading hydrogen producer, with about 33 million tons a year, but the vast majority comes from fossil fuels at about half the cost of producing with clean energy. The country aims to produce 100,000 to 200,000 tons of hydrogen from renewable sources annually by 2025, according to a plan published earlier this year.