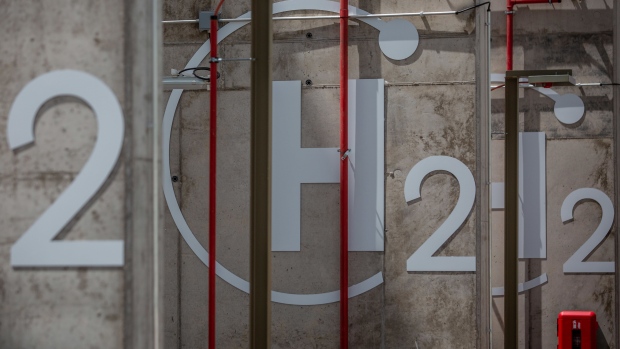 The chemical symbol for hydrogen on tank separation walls during the final stages of construction at Iberdola SA's Puertollano green hydrogen plant in Puertollano, Spain, on Thursday, May 19, 2022. The new plant will be Europe's largest production site for green hydrogen for industrial use. Photographer: Angel Garcia/Bloomberg , Bloomberg

(Bloomberg) -- The cost of clean hydrogen will fall to that of liquefied natural gas in a decade as global efforts to replace fossil fuels accelerate, according to Europe’s biggest operator of gas infrastructure.

“Green hydrogen today is not economically competitive against alternative energy sources, which will not be the case in 10 years’ time,” Thomas Baudlot, chief executive officer of energy solutions for Asia-Pacific at French utility Engie SA, said in an interview. The fuel is “very much part of the strategy of Engie.”

Interest in hydrogen, which is considered green if it is made using electricity from renewable sources such as wind and solar, is rapidly growing amid a global effort to cut dependence on coal and natural gas, which intensified after Russia’s invasion of Ukraine in February curbed fuel supplies and increased prices. While the clean technology is still in early stages, 35 countries have a hydrogen plan and 17 are preparing one, helping reduce the cost of the electrolyzers needed to produce the fuel, according to BloombergNEF.

The global energy crisis is accelerating demand in Asia for renewable energy to replace costly fossil fuels. Part of Engie’s Asia expansion will include marketing green hydrogen to customers, with Australia serving as the region’s production hub.

“We used to call our clients,” Baudlot said. “Nowadays the clients call us. And they want to go faster and bigger.”

Last month, Engie took a final investment decision in the Yuri renewable hydrogen project in the Pilbara region of Western Australia, with the first phase slated to be completed in 2024. The company is also looking to expand in Malaysia and the Philippines on the back of favorable regulations, Baudlot said.

Liquefying hydrogen presents a “dilemma” because it requires vast amounts of energy, he said. The process is expensive and consumes more than 30% of the energy content of the fuel, according to the U.S. Department of Energy. The fuel is also less dense than LNG, so transporting it at scale would require creating new fleets of ships, infrastructure and technology.

These restraints are why BloombergNEF expects the cost of liquefying and transporting green hydrogen from Australia to Japan by the end of the decade to be around $30 per million British thermal units. That’s nearly triple the price of a similar shipment of LNG under a long-term contract from an Australian export facility though not far off current spot rates.

“We can’t afford to rule it out,” Baudlot said. “It’s important to invest into all mediums. And once those are more advanced, natural selection will happen.”