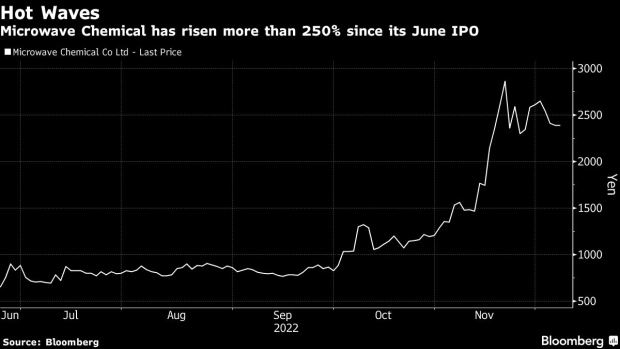 (Bloomberg) -- Shares of a small Japanese green-technology firm have more than tripled in less than half a year on investor bets that microwaves will play a major role helping manufacturers reduce carbon emissions.

Microwave Chemical Co. has jumped 268% since it listed in June, with its market value touching a high of about $300 million. Most of the gains have come in the past two months, making it Japan’s best-performing stock in the current quarter, and drawing the attention of short-sellers.

The Osaka-based firm, founded in 2007, provides solutions that use microwaves to heat, dry and melt materials. Unlike external heating, this technology transfers energy directly to the target molecule, saving time and energy, as can be seen in everyday household microwave ovens.

The company developed a way to harnesses microwaves for industrial use that can cut greenhouse gas emissions from chemical manufacturing up to 90% versus conventional heating, according to Iwao Yoshino, the company’s co-founder and chief executive.

“This is the year that the carbon-neutral idea really took off” in Japan, Yoshino said in an interview. “Traditional methods can probably reduce CO2 by only 5% or 10%. If we want to halve CO2 or make it close to zero, we need a completely new technology.”

The company gets about 90% of its revenue from Japan, helping design customized systems for customers including Mitsui Chemicals Inc., which is also an investor in Microwave Chemical. Other applications include freeze-drying for pharmaceuticals and food.

After mostly posting losses over the past few years, Microwave Chemical is projecting net income of 45 million yen ($330,000) in the year ending March 2023. That puts the stock on a whopping price-to-earnings ratio of over 775 times.

While high valuations aren’t unusual for young, growth-oriented firms, some investors have turned cautious and are wagering on a decline. Short interest stands at over 30% of its free-float, according to IHS Markit data, putting it among Japan’s top 20 bearish targets.

“It’s difficult to justify the current share price,” said Fumio Matsumoto, an analyst at Okasan Securities Co. Investors seem to have recently moved on to green-themed stocks from tech shares, he added.

At least one early investor still believes in the company’s potential. PNB-INSPiRE Ethical Fund, whose backers include Malaysia’s Permodalan Nasional Bhd, highlights the fact that Microwave Chemical’s core technology is based on years of lab research at Osaka University.

“They are trying to change an industry that has been unchanged for 100 years, and I think the fundamental changes are very impactful,” said Toshiki Shimizu, a board member at the fund. PNB-INSPiRE owns a 4.2% stake in Microwave Chemical.

CEO Yoshino said the company may need additional funding within five years to facilitate growth as its client base moves to comply with emission reduction targets. It also wants to expand overseas and establish branches in the U.S. and Europe.

“I think Microwave Chemical has the potential to create a new industry,” he said. “It is similar to the electric car industry, which replaced cars with internal combustion engines, which in turn replaced the horse-drawn carriage.”

--With assistance from Low De Wei and Alex Millson.